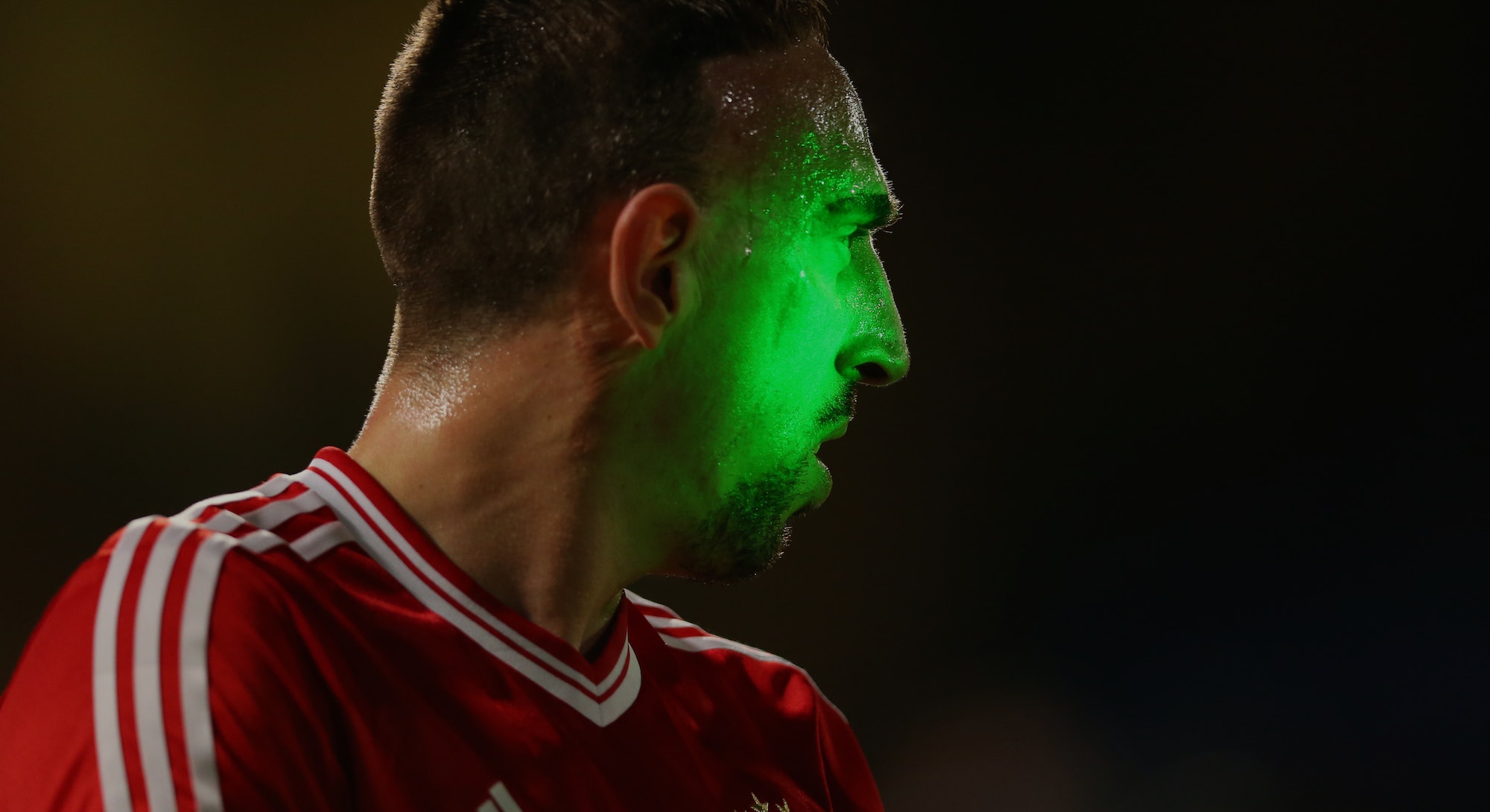 On June 26, 2014, Russia missed making it to the knockout stage of the FIFA World Cup in Brazil after drawing 1-1 against Algeria. The result sent the team packing from the most prestigious competition in soccer, which only takes place every four years, and the way it unfolded made it all the more devastating for Russia and its supporters.

Algeria’s equalizing goal came in the 60th minute of the match, when Islam Slimani headed a ball in the back of the net off a pass from a free kick. That’s all standard play during most games, but what happened in the lead-up to that moment caused quite a controversy: as Slimani’s teammate took the free kick, the TV broadcast of the game clearly showed a green light beam shining on the face of Russia’s goalkeeper, Igor Akinfeev, which may have cause him to lose sight of the ball prior to the goal.

That night, Algeria fans at the Arena da Baixada stadium in Curitiba, Brazil turned a laser pointer into the perfect distraction, and the Russian team wasn’t shy about blaming the device for the result that ultimately cost them their place at the World Cup. “[Akinfeev] was blinded by the laser beam,” then Russia manager Fabio Capello said in an interview after the game. “There are pictures. You can see that in the footage. This is not an excuse, it is a fact. There was a laser. I have never come up with excuses to get by in my entire life.”

FIFA, the sport’s governing body, hadn’t implemented its Video Assistant Referee (VAR) technology at the time, and it’s hard to say whether a review of that play would’ve changed the outcome. But, six years after that controversial World Cup match between Algeria and Russia, soccer fans in the stands are still using lasers to annoy, distract, and outright troll players on the field. And although they may view this practice as a harmless prank, some of these lasers could be potentially damaging to the human eye.

Just last month, in the Champions League game of Napoli vs. FC Barcelona, a fan was seen pointing a green laser directly into the vision of Barcelona player Arturo Vidal. It’s a trend that’s taken over professional soccer leagues around the world, from Brazil and Mexico to Italy and Spain.

Even though the majority of green lasers aren’t powerful enough to cause any vision damage, there are cheap, unregulated versions on the market that can be particularly dangerous if they’re being pointed at someone’s eyes. According to a study from the National Institute of Standards and Technology, out of 122 laser pointers it tested in 2013, nearly 90 percent of green pointers were out of compliance with federal U.S. safety regulations because they were overpowered.

Samuel M. Goldwasser, Ph.D., engineering consultant and author of Sam's Laser FAQ (“The Laser Bible"), says that in the U.S. the legal limit of a green laser is 5 milliwatts (mW), though the laws around consumer lasers vary by country. “That's 5,000th of a watt, which doesn't sound like much, but when it's in a concentrated beam it can be very, very bright,” he says, noting how easily accessible green lasers are. “You can buy them anywhere. You can practically buy them at dollar stores. You can certainly buy them on eBay, Amazon, all the other common outlets of junk.”

Echoing NIST’s research, Goldwasser says the issue is that while some of these green lasers being sold may be labeled as 5 mW, in actuality they end up being more powerful than they claim. According to James Orgill, who runs a YouTube channel called The Action Lab on which he tests high-grade lasers, the pointer shining on Vidal during the Napoli vs. Barcelona game was “at least 1W or maybe even higher” based on how bright it was on his face at that distance. That would be about 200 times above the legal limit for green lasers in the U.S.

Orgill, whose educational YouTube channel has over two million subscribers, says “this high strength of a laser can start fires and cause instant blindness at close range.” However, the green beam does become less dangerous the further a player’s eyes are away from it, he points out. Because the fan pointing it at Vidal was hundreds of feet away, Orgill doesn’t think it was strong enough to cause any temporary or permanent damage. Still, that there’s even a small chance that a player could be hurt should be more than enough for match officials and fans to take the matter seriously.

“As stated in the FIFA Stadium Safety and Security Regulations, laser pointers are considered prohibited items by FIFA and confiscated when the spectators are checked at the outer stadium perimeter,” a FIFA spokesperson tells Input. “When incidents happen within the applicable scope of FIFA's Disciplinary Code, disciplinary measures may be taken based on article 16, paragraph 2,” which state that teams are liable for inappropriate behavior from their fans and they may be subject to disciplinary measures should they should show any negligence in stopping the “the use of laser pointers or similar electronic devices.”

FIFA isn’t the only league dealing with this phenomenon, as green laser-wielding fans have also been spotted at NBA, NFL, and MLB games here in the U.S. There have also been incidents where people would shine light beams from these kinds of devices at airplanes, prompting the FBI to get involved in tracking down culprits. What those with the laser pointers may not realize is that it’s not all fun and games, and their actions could lead to serious accidents, be it on the soccer field or 30,000 feet in the air, where pilots could be momentarily blinded.

“The most damaging injury is a macular hole, a break in the part of the eye responsible for detailed, central vision, and permanent loss of this vision”

“The FDA is responsible for regulating lasers, however labels may not always be clear and some lasers marketed as toys can still be dangerous,” Dr. Ashley Brissette, assistant professor of ophthalmology at Weill Cornell Medicine and New York Presbyterian Hospital, said in an email. "The natural blink reflex of the eye and natural aversion (head turn) can be protective, but for some highly powered lasers, even a momentary exposure can be damaging.”

In other words, a fan can think they own a "legal" laser that won't cause a player any damage from hundreds of feet away, but that could easily take a turn for the worst if their device is faulty or overpowered. And the results for someone who’s vision is on the receiving end of that could be catastrophic. “The most damaging injury is a macular hole, a break in the part of the eye responsible for detailed, central vision, and permanent loss of this vision,” Brissette says. “Other injuries include bleeding in the retina and cataract — all of the above can permanently affect the vision or may require surgical intervention.”

Aside from the ban on lasers that's already imposed, FIFA didn't tell Input what other solutions it could put in place to mitigate this issue in stadiums all over the world – since it's clear fans are having their way with them. As it stands, the organization places all the responsibility on clubs to confiscate these lasers from supporters, but you rarely ever see a match being stopped when someone in the crowd is spotted shining a giant beam of green light on a player's face. And unfortunately, it doesn't look like anything is going to change until someone truly gets hurt.