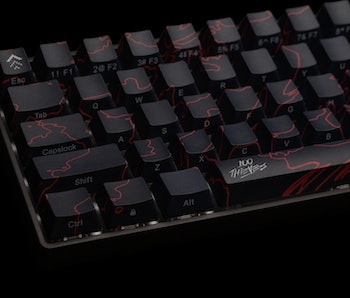 At the risk of sounding like the proverbial old man yelling at kids who dare come within three feet of his lawn, gaming is not what it used to be. This week, two companies that can be described as “designer gaming and lifestyle” brands became intertwined. Those words alone would have been meaningless not long ago. 100 Thieves, a company that combines competitive gaming, apparel (which can veer into the high-end category), and a roster of well-known streamers has acquired Higround.

For those unfamiliar, Higround is similar to 100 Thieves in that it seeks to be more than a gaming company but rather a lifestyle brand that happens to be gaming-adjacent. Higround places emphasis on gaming hardware, specifically keyboards and all the accompanying bells and whistles. Getting your hands on a Higround keyboard can prove to be difficult though, as Jay Peters of The Verge points out: “It releases its products in limited drops and says that every one of them has sold out. The company’s work even includes a collaboration with Apple’s Beats, though it had a limited distribution and wasn’t for sale.”

Higround and 100 Thieves will be releasing a limited capsule collection together to mark the newly formed acquisition. The collection consists of a mechanical keyboard, hoodies, and shoulder bags. Naturally, this drop will most likely sell out quickly once it becomes available this Friday, October 15 at 12:00 p.m. PT.

When did this start happening? — It’s hard to trace the transition of when the idea of a gaming lifestyle actually changed, going from something that should be avoided to a highly lucrative way to frame your brand. FaZe Clan immediately comes to mind. After all, the well-known eSports company has been trying to take gaming mainstream, with a wealth of high-profile streetwear collaborations and a Sports Illustrated cover to boot.

“I think it’s really important to understand that Higround will be operating completely separate of 100 Thieves,” stated 100 Thieves founder and CEO Matthew “Nadeshot” Haag in a video announcing the acquisition. “We don’t want to take over their identity, we don’t want to go too far deep into 100 Thieves injecting its DNA into Higround.”

It seems that Higround will maintain its identity but function as part of the 100 Thieves ecosystem. Rather than draw any more big picture conclusions myself, I’ll just leave you with this quote from Higround’s cofounder Rustin Sotoodeh from the same video mentioned above: “We felt like the gamer is evolving. Your audience [100 Thieves] and our audience have a design sensibility. They’re aspirational. And so we wanted to provide products for those kinds of people.”