A super-rare Atari game made big bucks for Texas Goodwill 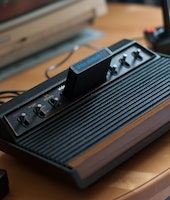 The Atari 2600 is one of the original hits of home console gaming, with more than 30 million units sold between its launch in the late 1970s and its discontinuation in 1992. Finding games for the classic console (sometimes called the Atari Video Computer System) can be like hunting for a white whale, though.

So you can imagine Alex Juarez’s surprise when he found a third-party Atari 2600 game called Air Raid in an unsorted bin of games and toys in Texas. Juarez is an e-commerce processor for Goodwill; he recognized the game’s T-shaped handle and sent his father a message to confirm its value.

Sure enough, his father responded with excitement. Air Raid is up there with the rarest games in existence — only five copies have ever been sold as collector’s items, according to a list kept by GameRant. Juarez listed the copy he found for auction on Goodwill’s website; after just a week of bidding, it sold for $10,590.79. And we thought PS5 resale prices were rough.

Super ultra rare — Retro gaming is just as popular as ever in 2021 — perhaps even more so, given how very unwilling most companies are to port older classics to newer consoles. It’s relatively easy to find emulations of retro games, but the hunt for original copies is really a game in and of itself.

Air Raid is super-rare even amongst the rarest of games. Goodwill said in a news release that the “only 12 copies of the game have previously been found and sold.” One sealed copy sold for more than $33,000 in 2012, though that one was also sealed in its original box with the instruction manual.

The best kind of auction — It is obviously very wild that a single video game — even one as difficult to find as Air Raid — would sell for $10K. Hardcore retro gaming isn’t the most accessible hobby, and the normalization of such lofty pricing doesn’t help.

But if any organization is going to make thousands off the sale of a single copy of Air Raid, Goodwill is up there with the best possible options. Goodwill says the Air Raid sale could provide “day habilitation services for a year for one adult with disabilities; or provide 20 homeless individuals with job placement services and community resources; or help 10 at-risk youth earn their GED and a paycheck at the same time.”