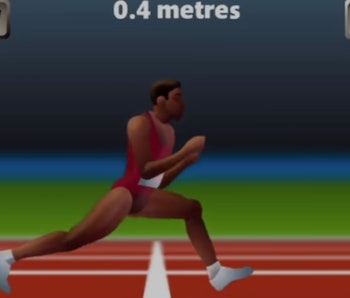 If you've never played QWOP, it's safe to say you've never experienced peak human frustration. The game has players use four keys to control the movements of a sprinter's thighs and calves under real-world physics, with the goal being figuring out how to move each at just the right cadence to keep the runner upright and propelling themselves forward.

It might seem straightforward, but QWOP is incredibly difficult — so much so that an AI program trained for 65 hours wasn't able to beat the most skilled human QWOP players.

Training AI to game — Games are a common way to test artificial intelligence syustems, which are designed to study and identify patterns buried in large amounts of data. In the case of games, they can quickly review hours of gameplay to calculate probabilities and determine with each successive move what needs to happen next in order to advance.

Considering QWOP's notorious difficulty, engineer Wesley Liao decided it would be a great testing ground for AI. After creating a JavaScript tool to allow an AI program to play and interact with QWOP, he attempted to teach the program by having it play the game itself and learn which actions resulted in positive outcomes (the sprinter moving forward), and which ones resulted in negative outcomes (falling over).

The program was able to figure out a technique to get across the 100-meter finish line, which is impressive — even getting over the starting line in QWOP is an achievement. But it didn't break any records doing so.

Man over machine — Liao later tried to improve the program's speed by enlisting one of the top QWOP players in the world, Kurodo, to record themselves playing the game at expert level. Even with those videos to analyze, the AI program still needed to practice another 50 hours to get its best result. And even then, its fastest 100-meter dash time was 1 minute and 8 seconds; the current 100-meter record for QWOP is 48 seconds. Liao is confident, however, that with more training and an updated reward system, setting a world record with AI could isn't out of the question.

Either way, the takeaway here is that QWOP is very, very hard... and that humans are still better at some things than AI. At least for now.

The video below goes into more detail on Liao's process of training his program.