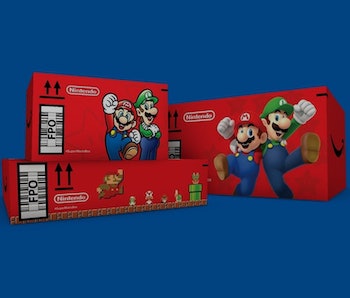 Amazon will be delivering some orders in special Super Mario Bros. boxes. Intended to commemorate the 35th anniversary of the game, the boxes are in limited supply and will be used randomly. Ordering a Nintendo product won't increase your chances of getting a Mario box.

Porch theft — We have to wonder if these boxes might become collectors items, and if so, how that might entice porch pirates. And what if thieves wrongly assume they have Switch consoles inside?

Either way, Mario fanatics will cough up dough for anything limited edition, so we wouldn't be surprised to see a market for the boxes sprout up on eBay.

Besides the boxes, Amazon has also launched a Super Mario splash page featuring a timeline of the franchise from the first game that was released in 1985. From the page you can read trivia and, of course, add some newer Mario games to your cart.

Stealing thunder — Nintendo has been dropping quite a few releases around the Mario anniversary, including Mario Kart Live: Home Circuit, a mixed reality game in which players use a smartphone to drive real RC cars around their homes. The company is also releasing a Game & Watch handheld that will come preloaded with the original Super Mario Bros.

The combined launches are a great way to juice some new sales. And conveniently draw attention away from the upcoming releases of the PlayStation 5 and Xbox Series X. Both consoles are set to be released next week, just in time to relieve our collective election stress.