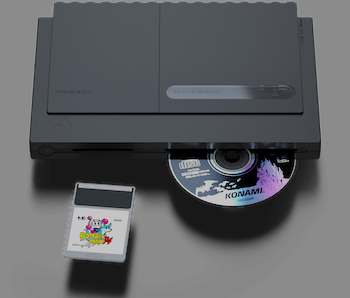 Initially announced back in October 2020, Analogue’s Duo reimagines the ‘80s and ‘90s of home video games in a sleek and sharpened package. Duo is compatible with “almost every NEC system and game format,” like TurboGrafx-16, and lets you revisit the 16-bit era in 1080p.

Originally set to be available sometime in 2021, Analogue’s official website now states that the console is “Coming 2022.” When exactly that will be is anyone’s guess.

Similar to Analogue’s handheld console, Pocket, the Duo is “completely engineered in FPGA.” For the uninitiated, this allows the device in question to run electronics down to the hardware level. The promise to prospective users is that the Duo will let you experience “the entire NEC era free of compromises.” To put it simply, lag is non-existent while playing either retro console.

People have been making use of emulators to relive games from past eras. But there’s been a rise in the production of modern-day retro consoles that seek to revamp the past, while staying true to the form. Accordingly, companies like Analogue have carved out a niche by attempting to preserve a snapshot of video game history.

Basic Details — The Duo is available in two colorways, compatible with HuCards, TurboChips, and CDs, and boasts Bluetooth for wireless play. The console supports up to four wireless controllers, but you can also opt to plug in wired controllers using the original-style port or USB ports. Users will be able to stream at up to 1080p using HDMI, and there’s an SD slot for firmware updates. The asking price is $199.

It would be logical to approach the Duo with a contained level of interest, especially with the knowledge that quantities are limited. And who knows when it will actually release. The Pocket was announced in 2019 but then experienced three major delays throughout its production and shipment process. As supply chain shortages and COVID 19-restrictions don’t look to be going away anytime soon, the timeline for the console looks like it will be impossible to predict.

Just know if you end up paying for a pre-order, you might be waiting around for a while, $200 poorer.