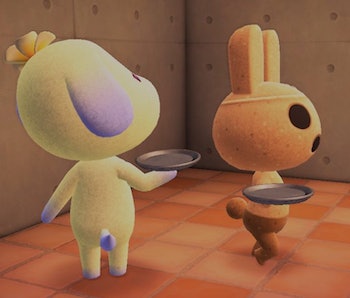 As reported by Polygon, the glitch was accessed through the most recent DLC, Happy Home Paradise. By visiting the café (an unlockable and customizable facility) on Lottie’s vacation islands, players can undress their characters. However, the buck doesn’t stop there. Perusing the Animal Crossing subreddit, there are a number of posts displaying various characters going au natural in a number of different locations.

The Naked Truth — Looking at these images, it is fun to marvel at the attention to detail developers pay when it comes to full body textures, especially for regions that are normally covered. One user in the comments expressed their excitement over the reveal: “I absolutely love this and I’m weirdly happy to see the detail they put into her whole figure even the parts that should be covered.”

Another commenter raised an interesting point about how digital nudity is assessed by ESBR ratings, a self-regulatory organization that assigns age and content ratings to video games. Developers making a full “nude” skin allows for texture continuity regardless of what a character is wearing.

Elder Scrolls Oblivion had a full-nude female texture that, lo and behold, contained nipples, an aspect of any human’s torso. While users needed a mod in order to actually see the complete figure, this (naturally) happened — and it was one of the reasons the game’s rating changed from T to M.

Moving forward, I wonder what Nintendo’s response will be. Fix the glitch? Ride it out? I’d have to guess the company will lean more towards the former. Time to get naked as frequently as possible, until you can’t anymore... Or until those nether regions are blurred out.