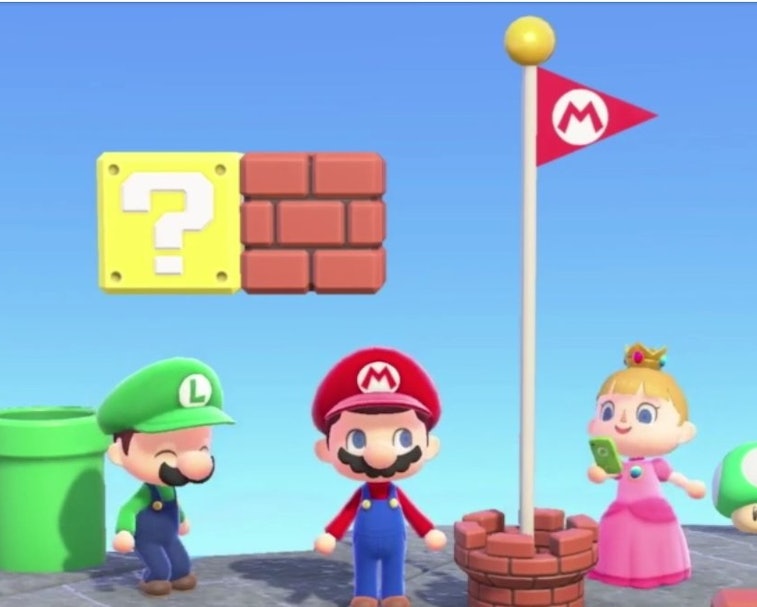 Mario-themed elements and characters are coming to Animal Crossing: New Horizons (ACNH) on February 25. The news surfaced on Wednesday during Nintendo's mixed-bag of a "Direct" livestream event. Come next week, your ACNH buddy doesn't have to haul butt from one point of your island to another thanks to the new addition. Now you can just use a warp pipe for transportation. If I was a hardcore ACNH fan, I'd be delighted right now. Just like this gamer.

Make the Mushroom Island? — For the right sort of ambitious ACNH gamer, this collaboration could offer the necessary tools and motivation to recreate the Mushroom Kingdom. In the past, ACNH players have already recreated famous film scenes, duplicated features of other gaming series like the Pokémon Gold and Silver’s Johto region, and even the platform's even been used to host virtual fashion shows.

Now that the Mario brothers have arrived in ACNH world, players might have the right kind of items to make their own edition of the Mushroom Kingdom. You have almost everything you need for it: coins, mushrooms, goal posts, bricks, and other details from the franchise to make it work. If the Mushroom Kingdom is too time-consuming to replicate, there are always alternatives... like making a garden or spooky trail resembling the original ones in Super Mario Bros.

Heroes only, please — Personally, I would be interested in seeing how Wario behaves in ACNH. Something tells me Nintendo would be sure to retain his signature causticness. The one character you won't see, based on what the latest preview has shown so far at least, is the menacing Waluigi. Which we don't mind, frankly. Our ACNH island is a balm for the trials and tribulations of real-life... keeping it free of villains fine with us.