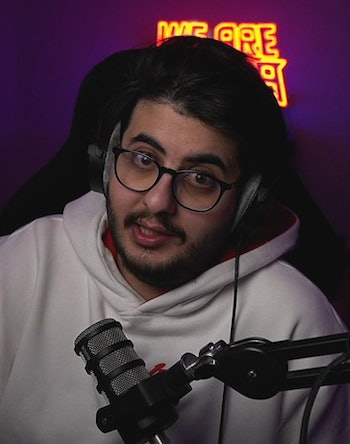 For nine months, Twitch streamer Amjad gamed relentlessly in a bid to raise money before her first child was born.

Amjad — who was playing Propnight and League of Legends for an audience of 11,500 followers under the name @Mamacita — streamed six hours a day for five days a week, plus 12 hours on Thursdays, to make up for her one day off, which she spent with family.

The 26-year-old streamer, who lives in Saudi Arabia with her husband, had stumbled upon the career path accidentally. She was struggling to find employment as a computer science graduate when a friend recommended she try Twitch. Amjad quickly fell in love with streaming, and began to broadcast her gaming sessions to followers using an avatar. The platform became her sole source of income.

She played video games over her swollen belly for as long as she possibly could. Then, on February 9 — the day her water broke — she put her streaming on pause and issued an apology. She knew she’d earned enough to welcome her child into the world, and all that gaming had exhausted her.

“I was working so hard and putting so much pressure on myself, especially in the last month, because I needed the payment to provide for my daughter,” says Amjad, who asked Input to withhold her last name for privacy reasons. “Then I got an email [from Twitch] that said I wouldn’t be getting paid for that month. I’m left empty-handed.”

Amjad was devastated and feels betrayed by Twitch. But she’s more worried about others. “Thank God that I have family around me that can cover what I’ve lost,” she says. “But I’m thinking about other streamers. Some of them are literally going to be homeless.”

“A lot of content creators that started on Twitch are now in TV shows. It’s a serious job over here.”

Amjad is one of many Arabic streamers who have had their payments blocked by Twitch. According to users in the Middle East and North Africa (MENA) region, the broadcasting platform has put a freeze on their payouts from subscription and advertising revenue, leaving many full-time streamers without their monthly income.

Those affected say the issue, which began on February 19, came without warning and has not been formally addressed by Twitch since. On Twitter, streamers have been making noise under the hashtag #Twitch_Arab_Streamers. Some users have posted screenshots of their messages from Twitch, in which the company apologizes for the “inconvenience” of withholding pay, blaming it on “a discrepancy with certain tax information provided during the onboarding process.”

In its communications with users, the company has not said how — or when — things might be resolved. (Twitch did not respond to Input’s requests for comment.) The situation has left affected streamers worried about their future.

Streaming is incredibly popular in the Middle East. “There are tournaments happening in the UAE, Egypt, and every country in the Arabic region,” says , 22, a head organizer and co-founder of the Arab Game Awards, who currently lives in Turkey (he’s originally from Syria). “People here just like to watch streamers and have fun,” says Hallak, who is not a streamer himself. “We share the same passions and enjoy sharing them with others.”

Full-time streamer Abdullah Fahad, who also had his pay withheld by Twitch, believes the MENA community is a large source of revenue for the streaming platform. “Our community is very big, and it gets bigger every year. There are a lot of full-time streamers, big numbers, and a lot of revenue,” says Fahad, 22, who lives in Saudi Arabia and streams as @eagle to 62,500 followers.

He references shongxbong, RakanooLive, and ​​ixxYjYxxi — all of whom have over one million followers on Twitch — as examples of prominent Arabic streamers. “There are some streamers that have 12,000 viewers on average for every stream,” he adds.

Fahad says many Arabic streamers use Twitch as their sole source of income, as well as a way to launch their careers. “It creates a lot of opportunities for people. Marketing companies see you. You get advertising deals,” he explains. “A lot of content creators that started on Twitch are now in TV shows. It’s a serious job over here.”

Hallak has been trying to coordinate streamers in the MENA region to better understand the issue at hand. “Some of them did not do their taxes correctly, but they’ve been doing this for three years and everything was working,” he says. “Twitch never told anyone that anything was wrong.”

It appears that all streamers in the region may be paying the price for the minority’s errors. “I’ve talked to people that are 100 percent sure they did the IRS tax correctly, and they’ve also been blocked,” Hallak says. “It seems that 90 percent of streamers haven’t done anything wrong, but they’re still not being paid.”

The blocks are just the latest twist of the knife for MENA streamers, who say that they are consistently excluded and mistreated by Twitch. “They take 50 percent of our income, but they won’t give us contracts,” says Fahad, who says that he filled out his tax information correctly. “They do events for streamers, and they don’t include the Middle East. They exclude us.”

For Amjad, who says she was also assured by Twitch that she had filed her tax information correctly before the block was put in place, the biggest issue is a lack of assistance. “They don’t have any dedicated support systems for the Middle East for any problems,” she says. “We try to contact them, but how can we contact a company that doesn’t have support in our area?”

Meanwhile, the affected streamers are considering taking their services elsewhere. “We’re warning followers that their subscriptions will end up in Twitch’s pocket. We’re asking people to unsubscribe, and we’re removing ads from our channels,” says Fahad. He feels thankful that members of his community are providing direct donations to help out.

Amjad is heartbroken. She says she should be enjoying her new life as a mother and spoiling her daughter, not facing so much uncertainty. She hopes Twitch will fix things soon, so she can get back to gaming.

“I don’t want to stop streaming. I love my job, and my comfort zone, and my people,” she says. “My [Twitch] community is my family. I can’t imagine my life without them — and I don’t want to.”