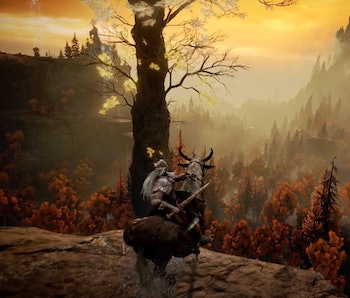 Elden Ring is finally out in the wild, and while some are having the time of their lives in the Lands Between, others are expressing disappointment and even outrage at the quality of the game's performance.

Though fans have concentrated their ire on the PC version in particular, it seems that the console versions don't run particularly well either. It's gotten so bad that publisher Bandai Namco has apologized for the issues that some players are having.

"We are currently experiencing some issues that are preventing the game from playing properly under some conditions... We apologize for any inconvenience this may cause and ask for your patience." The post goes on to list the various issues that the publisher plans to fix in the future, including mouse sensitivity, Steam account names with 2-byte characters not working with the game's anti-cheat, and, of course, the persistent stuttering on all platforms.”

Frame job — Hardware outlet Digital Foundry released some preliminary findings about Elden Ring's performance yesterday, and the results were far from promising, to say the least. According to DF, the PS5 and Xbox Series X versions vary from 45 to 60 fps, rarely reaching a stable 60. If you have a PS5 and you care about frame rate, Digital Foundry recommends installing the PS4 version (yes, really) to your console: though it runs at a lower resolution, it's a much smoother experience.

However, there is a bright side for console players: the consoles seem to lack the annoying stuttering issues present in the PC version, which might be caused by DirectX 12. These microstutters can be up to 250 milliseconds in length, which can be pretty damn distracting. On Elden Ring's Steam page, reviewers are reporting a wide variety of bizarre bugs with the PC version, including invisible enemies, textures replaced with floating black boxes, and unplayable frame rates. Currently, it's sitting at a 59 percent "mixed" rating.

As we mentioned this Elden Ring review, the game's PC performance is decidedly disappointing. The microstutters are particularly bothersome during boss fights in the overworld. However, in my 35+ hours with the game, I haven't experienced anything remotely game-breaking, and my PC barely exceeds the recommended specs. That said, given that Bandai Namco is under enormous pressure to fix these problems sooner rather than later, it might be worth waiting for a patch on PC.