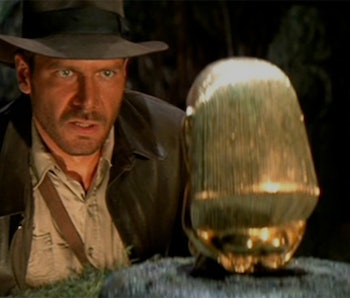 An Indiana Jones game is officially in the works from Bethesda, one of the world’s most popular game development companies. The game will be created by Machine Games, a subsidiary of Bethesda’s parent company ZeniMax, and, yes, it will feature an original story in the Indiana Jones universe. LucasFilms will also collaborate on the project.

Bethesda is having a hell of a decade so far — and it hasn’t even released anything yet. Okay, so we may be overstating things just a bit, but Bethesda has already proven itself to be one of the most exciting gaming studios of the 2020s thanks to Microsoft’s $7.5 billion acquisition of ZeniMax.

Now it’s full speed ahead for Bethesda and its sibling studios. Indiana Jones is the perfect choice of series for a new game; despite being rife with gaming potential, there hasn’t been a new Indiana Jones game in almost a decade. So yes, we’re excited, if you couldn’t tell.

Start the engine! — Indiana Jones has a video game history nearly as old as that of its popular film franchise. Atari had the first attempt at an indie game with Raiders of the Lost Ark, which was created for the Atari 2600 just a year after the movie’s theatrical release. Other studios have also translated the films directly into gaming experiences — up through the Lego Indiana Jones games released in 2008 and 2009.

Fortune and glory — When it comes to a reboot of the Indiana Jones game series, we can think of no one better than Bethesda to spearhead the game’s creation. Bethesda has a track record of creating beautiful, expansive, story-driven games (the Elder Scrolls and Fallout series, to name just two). That’s exactly the treatment Indiana Jones needs right about now.

Today’s trailer doesn’t reveal much about the game at all, but that classic John Williams soundtrack is enough to set the hairs on the back of our necks standing at attention. We’re left with more questions than answers — Will we be fighting Nazis? Will there be aliens? Will it only be available on Xbox? — but we’re willing to bet it’ll be worth the wait.