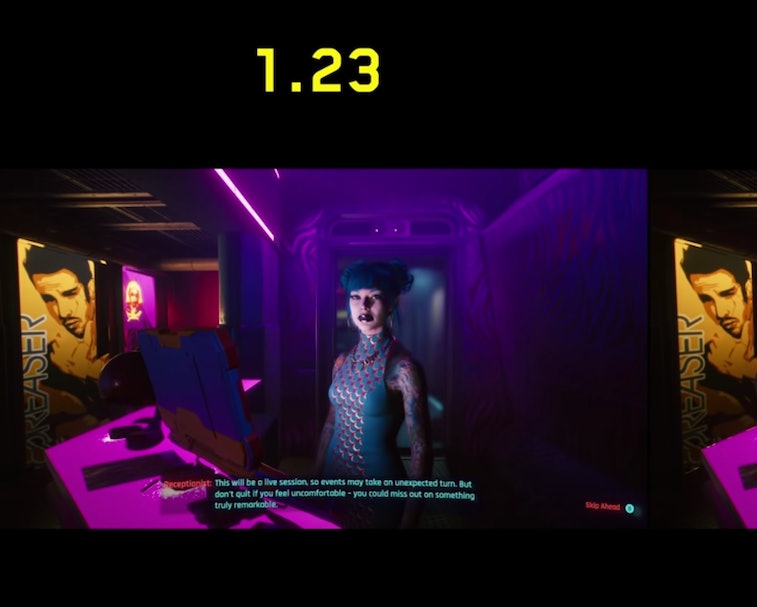 At this point, it feels like CD Project Red has reached “lost cause” territory. The developer behind Cyberpunk 2077 is releasing another major patch for the open-world game, and this one includes a fix for a brothel scene where players kept inadvertently choosing the wrong character to sleep with.

When we say “wrong,” we’re not casting any aspersions — players should feel encouraged to virtually sleep with whomever they want. Early on in the game, players visit a brothel called “Dollhouse” where they seek to find more information about missing quest-giver Evelyn Park. During the mission, they’re meant to hook up with either a male or a female sex worker.

The scene was designed so that two workers are presented with their names and pictures, but they’re presented only for a split second before disappearing thanks to a bug, after which a dialogue asks the player to choose between them. Because it happens so fast, however, players have reported struggling to remember which one is female (Skye), and which is male (Angel). And with names like that, who can blame them?

Now we’re of the view sexuality is a spectrum and players might do well to broaden their horizons, but we can also understand their surprise if they’re expecting one virtual person but, umm, get the other.

Is Cyberpunk 2077 redeemable — Apparently the issue is fixed in the latest patch. Not that it really matters, though, considering you don’t actually see your character having sex with the worker. Whether you choose Skye or Angel, all you do is talk to them.

Fixing the issue is fine, but at this point, most bugs in Cyberpunk 2077 have seemingly been resolved and the larger issue is that players have found the game is simply lacking any real depth.

Cyberpunk 2077 appears deep and thoughtful on the surface, and the skeleton for a great game is there, but once you get far into it, you realize the political message it’s trying to send is empty. It tries to pit you against the Arasaka Corporation, a supposedly evil and powerful multinational, but doesn’t explain why the company is bad. It also promised revolutionary gameplay and narrative... but has failed to deliver either. Sure, Cyberpunk 2077 looks cool, but that’s a far cry from what we expected thanks to the outsized hype that surrounded the project.