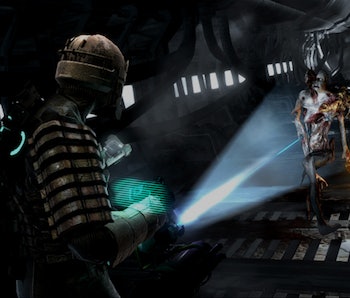 As more news trickles out about the forthcoming Dead Space remake, which is being brought back to life by Motive Studios, a new update from the EA-owned developer focuses on the most compelling aspect of the game: its immersive and chilling sound design. The studio has uploaded a series of videos to the official Dead Space YouTube channel that go over things like audio occlusion, weapon sound effect comparisons, and provide an early look at some pre-alpha gameplay.

These videos come out just a day after a GamesBeat report noted that EA plans on targeting an early 2023 release period for the game. While the plot of the game is enough to be frightening on its own — engineer Isaac Clarke boards a government spacecraft that has gone radio-silent, in pursuit of his girlfriend, only to encounter monstrous alien entities known as Necromorphs — the attention to detail in the game’s audio elevated Dead Space from a solid adventure-horror to a truly terrifying experience.

One key feature of the revamped sound design of the Dead Space remake will be how users interact with sound that is either occluded or obscured — in other words how sound frequencies change based on what objects are in-between the listener and the source of said frequencies. As pointed out in the video above, there will be a larger emphasis on tweaking the sounds players can hear based on these audio occlusions. So the frequencies players encounter when hearing something behind a wall will be muffled, as opposed to encountering that same sound with no objects obstructing it.

Other changes — Aside from audio occlusion, there were updates on weapon sound effect comparisons and the A.L.I.V.E system. The former is, as you can tell from the title, related to enhancing some of the weapon sound effects from the original Dead Space. Part of the development process involves analyzing the game’s original audio files, to improve upon or incorporate into the remake.

The A.L.I.V.E system, which stands for Adrenaline, Limbic System Response, Intelligent Dialogue, Vitals, and Exertions, is focused on the sounds that Isaac, our protagonist, will make. He will now talk, and based on his levels of fatigue or physical shape, there will be different versions of scripted dialogue. As you can imagine, winded Isaac sounds different than regular Isaac.

Finally, Motive Studios treated us to an early look at some gameplay, but keep in mind this is not necessarily indicative of what the final version of Dead Space will look like. Start counting down the days until you can terrify yourself with this game!