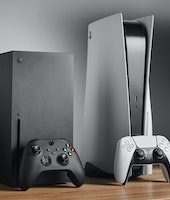 The number of PS5 consoles Sony states it has sold since launch.

As of March 31, Sony says it has officially sold 7.8 million PlayStation 5 consoles, surpassing the PlayStation 4 at the same stage of launch by a stunning 200,000 consoles. The company shared the news in its latest financial earnings report, noting that PlayStation Plus currently boasts over 47.6 million subscribers.

By the latter end of 2020, Sony had shipped 4.5 million PlayStation 5 units. Another 3.3 million units were shipped between January and March. In total, the operating profit for Sony is $3.14 billion for the financial year of 2020, making it a groundbreaking record success.

King of consoles — It might not be surprising to veteran gamers who have feverishly followed Sony but as NPD noted in earlier April, in the first five months of its official release in November 2020, PlayStation 5 became the most rapidly sold console in American marketplace history. This accounts for both how much money was spent on the console as well as how many individual units were sold.

This skyrocketing achievement took place despite the shortage of semiconductors that hit not only PlayStation 5 but also Xbox Series X and graphics-critical GPUs by Nvidia. On top of this dearth, scalpers had hit Sony hard by snagging PlayStation 5 consoles off shelves and selling them for obscenely higher than its retail price.

Sony wants to go harder — You would think that the sales figure would give Sony a chance to take a breath and pat itself on the back for trying to keep up with the market demand. But the company has already said that it wants to do better. Way better. Sony executive deputy president Totoki Hiroki explained during an earnings presentation, "Our current target is to exceed the 14.8 million units we sold in the second year after the launch of the PlayStation 4."

"In order to meet the strong demand from our customers, we will continue to work to secure components and strive to do our utmost to produce and sell more units than that target," Hiroki said. "Primarily due to improvements in the profitability of the PlayStation 5, we expect hardware and peripherals together to contribute the same level of profit for the full year as they did in the previous fiscal year." Hiroki’s drive matches the ambitious tone of Sony Interactive Entertainment CEO Jim Ryan who, on top of this accomplishment, recently revealed that Sony was working on PlayStation 5-exclusive games for 2021. The drive never ends.