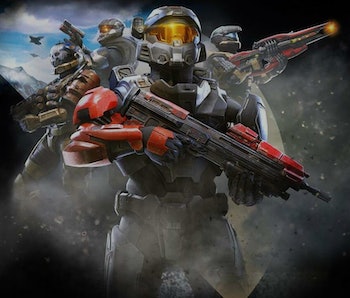 Like many gamers, I have spent the last couple of weeks obsessing over the multiplayer of Halo Infinite. Visual bugs and battle pass grumbles aside, I’m stunned at how much I’ve been loving my time with it, matching my surprise that I’m half decent at the game, steadily climbing the tiers of ranked arena — I’m gold level 6 now!

In recent years, I’ve become close with a group of friends for whom Halo is a huge part of their connective tissue. My history with the franchise, on the other hand, has been minimal — my first real time spent with the series was the Master Chief Collection. So going into Infinite, I was excited to experience a brand new Halo game with them, and the fact we’re all similarly enjoying it is immensely satisfying.

So heading into Thanksgiving weekend, a window when I’d simultaneously have more time to spend with the game (thanks to days off of work) but during which I’ll also be traveling and spending time with family, I had to pre-plan my strategy on when I can play — and that started with a choice: how am I going to play?

Reach — In the old days (and by the old days I mean a couple of years ago), playing a console-level video game on-the-go required players to lug around bulky hardware. With the advent of game streaming, traveling with a console has become a somewhat optional exercise.

I say somewhat optional, now more than ever, specifically because of my tests with Xbox cloud gaming and Halo Infinite. Don’t get me wrong, the game runs shockingly well, even by the service’s already excellent standards, over the cloud — rarely stuttering or dropping in quality. But one fundamental truth about game streaming becomes beyond apparent when spending even a few seconds in an Infinite multiplayer match, and I don’t know if it’s something Xbox will ever be able to fix.

A headshot — I’m talking about input lag, an issue that is dismissible in many instances, but debilitating in a few, and none more than Infinite. Cloud gaming works very similarly to cloud video via a service like Netflix — the data resides on a remote server farm, and a video of it is being beamed to your device. Gaming is different in really only one way — the viewer is sending inputs via their controller back every few milliseconds, and often multiple inputs at once. Those inputs take time to be transmitted to the servers, however close they might be, resulting in a brief delay between the actions of the gamer and the results of those actions.

As mentioned above, with most games the delay isn’t noticeable, as they don’t require as precisely timed actions to flow as intended. That could not be further from the truth with Infinite.

Even at my home near NYC, shots that I would have otherwise made on console are just a fraction off. Crucial melee attacks narrowly miss their mark. Driving is an even greater practice in frustration than it is on my Xbox Series X. Trying to play ranked matches, as such, is out of the equation, but even more casual experiences in quick play and big team battles have the joy drained from them as I constantly feel like I’m not just competing against other players, but against my own choices. While, with other experiences, I’ve been lost in the illusion that I’m not gaming natively, my time with Halo Infinite is a constant reminder of it.

Going back to my Xbox Series X, I wanted to see how the input lag between the wireless connection of my controller to the console was by really keeping an eye out for it, and it’s almost imperceptible. I tried to time myself between moving the right thumbstick and the corresponding action, but my reaction to stopping my timer was slower than the input lag. However, as you can see in the above video of Infinite running via Xbox cloud gaming on my iPhone (footage slowed down by 4x) the game reacts to my input many milliseconds after my thumb has left the stick.

Spartan abilities — This example is also under optimal conditions. Firstly, it’s the game’s training mode, which isn’t connecting to a bunch of other people in a multiplayer match, which as you can imagine, does not help with input lag in the slightest. I’m also playing with a controller that is physically connected to my phone — playing on a wireless controller compounds the issue further, as it has to transmit the input to the phone before the phone transmits it to the server, likely in NYC, very near my home.

The problem with input lag is that it will never really go away, no matter how good internet connectivity gets (and I have some of the best — 9ms ping via Verizon’s gigabit service). Some companies have come up with crafty solutions to the problem, like Google with their Stadia controller, which connects directly to the server via WiFi rather than using the device you’re gaming on as an intermediary. Testing out Destiny 2, the closest analogue to Halo Infinite available on Stadia, a direct connect WiFi enabled controller certainly helps the situation, but is still a far cry from a local connection to dedicated hardware.

My real-time strategy — What Microsoft and other companies have achieved in the last few years with cloud gaming is extraordinary, and it’s only going to get better from here. But my dreams of playing multiplayer matches in Halo Infinite, no matter where I am, have been dashed, and proven to me that cloud gaming will never be able to truly replace the console experience. This Thanksgiving, the tiny Xbox Series S is getting packed for our long haul.