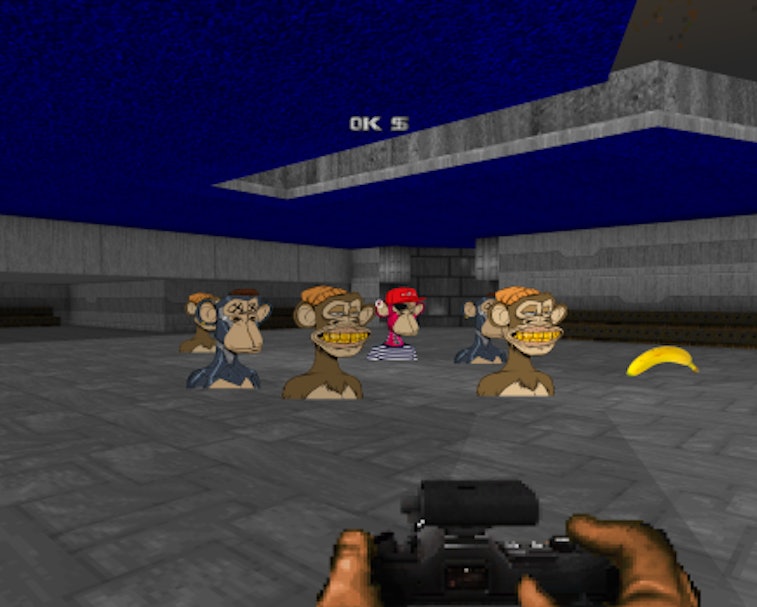 Despite releasing nearly three decades ago, Doom II is still having cultural reverberations five presidential administrations later. Just take a look at how the game was reimagined in 2021 — a Hungarian software engineer taught a group of rats to maneuver down a hallway in the hellish shooter, Twitter users replied to Tweet2Doom in order to execute a string of in-game commands, and the mods continue to roll in, the latest of which involves none other than the Bored Ape Yacht Club.

The Doom mod has become an art form unto itself, and can best be summarized as a tweak that typically replaces the grotesque monstrosities one usually faces in the game, with something like the Simpsons extended universe or characters from Spongebob.

This particular spin on the Doom mod, was created by Ultra Boi and would probably upset the crypto/NFT obsessives. Instead of blasting your way through a progressively grosser series of demons, players are given a camera to snap away at an onslaught of Bored Ape NFTs.

Running Joke— They say that art is often a reflection of the period it was created in, and NFT Doom would certainly check that box. There is somewhat of an ongoing saga on Twitter that goes a little something like this — NFT enthusiasts will post about their latest pickup, only to be trolled in the replies by users who claim to have taken screenshots of the digital art in question, which they claim to then own as well. The only way for the NFT owner to win is simply not to engage, but engage they do!

Accordingly, NFT Doom feels like the manifestation of these sorts of interactions. As players shoot away at waves of Bored Apes, each one loses $999,999,999 of value, which would obviously render them worthless. It’s clearly an exaggeration but the point still stands: why exactly are people spending so much money on these things?

The answer of course being, it seems like an opportunity to get in on the ground floor of a money-making scheme early. Major brands are only adding to the validity of the whole endeavor by trying to incorporate NFTs into their own games, like Ubisoft. Predictably, fans are anything but excited.

This upcoming year will undoubtedly bring even more NFT news into our lives, so projects like NFT Doom inject a much-needed laugh amidst a sea of groans.