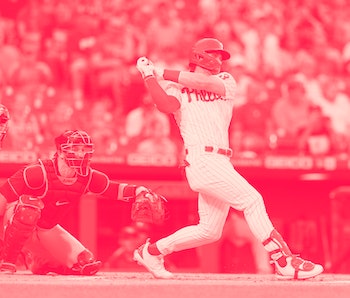 The last time EA got involved with baseball simulations, the world was quite a different place — George Bush was president of the U.S., there was still competition in the NBA video game space, and the notion that something called a non-fungible token could revolutionize art would get you laughed out of whatever room you occupied. Now the sports video game juggernaut is getting back into the fray with MLB Tap Sports Baseball 2022, the company’s first baseball video game since 2007’s MVP 07: NCAA Baseball.

MLB Tap Sports Baseball 2022 was developed by Glu Sports, a subsidiary of Glu Mobile, which is itself owned by EA after the latter acquired the mobile game developer in a splashy, $2.1 billion sale last April. The game is free-to-play (although there are plenty of microtransactions you can partake in) and can be downloaded through either Apple’s App Store or Google Play. It’s the first title that was released since Glu was absorbed into the EA ecosystem and adds to a formidable portfolio of mobile games that includes Kim Kardashian: Hollywood.

This year’s edition of Tap Sports Baseball features Bryce Harper, who is the reigning National League MVP and currently plays right field for the Philadelphia Phillies, as the cover athlete.

Andrew Pedersen, EA Vice President of Mobile - Sports, said: “This season, we’re excited to bring a more streamlined and responsive UI experience along with greater depth and improved realism that allow for players to compete amongst the very best on the diamond!”

Updated features — The new game adds customization options for users to deck out their avatars in all-new gear, which will have an effect on the playing experience (such as in-game boosts). The visual fidelity has been much-improved in the new game, with over 300 new motion-capture animations to enhance the game’s realism. Additionally, the overall UI has been revamped, coupled with improvements made to player models and animations.

For anyone returning to the series, you can import Keeper players from last year’s game to continue using your old roster. Here’s a link to more information regarding that process.

An integral part of the Tap Sports Baseball series is the ease of use and relatively low barriers to entry — players navigate MLB games through simple, tap-to-play controls. This aspect of the game is part of why mobile games are so appealing: it’s something that can be done both on-the-go and with little investment. Whether or not EA eventually makes an MLB game for consoles again is undetermined, but for now you can still tap your way to the World Series.