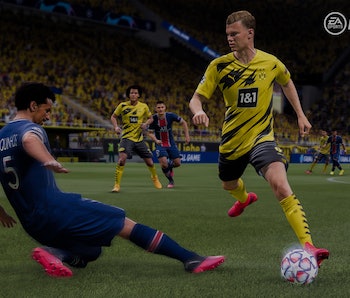 EA is reportedly investigating an employee for selling rare FIFA items for cash, with much of the evidence against the employee appearing across social media channels. The hashtag #EAGATE is being used on Twitter to share player experiences with the supposed FIFA black market. The news comes only a week after similar allegations of staff benefiting at the expense of consumers emerged at Nike, prompting a veteran VP at the company to step down.

The alleged sales are pretty staggering — FIFA has a huge fan base, and those fans take the game very seriously. In one case, a couple of “Prime Icon Moment” players were sold for €1,000 (~$1,190), according to a report from Kotaku.

The evidence being presented is difficult to refute. Leaked WhatsApp messages and other communications, in particular, point to a large-scale operation being run by EA employees.

EA now says it’s launching an investigation into the alleged insider trading. The full extent of the operation isn’t yet known; in fact, not much about the operation is known at all.

We don’t know much yet — The rumored FIFA black market is just that: rumored. Screenshots currently account for the vast majority of the evidence, and we all know that’s not exactly enough to build a case around. Screenshots can be faked. But if they are faked, one has to wonder what the motivation would be for doing so.

According to chat screenshots in the #EAGATE hashtag, the alleged seller is offering packs of Icon cards: two for about $900 or three, with two Team of the Year cards, for about $1,190. The seller tells the buyer that there’s “no risk” in taking part in the black market trade and says they’ll only need to provide their PSN and EA ID to initiate the trade.

Some users speculate that the operation is extensive, while others believe only one or two employees are behind it.

EA is on the case — EA is taking a serious stance against even the slightest chance this might be happening right under its nose. The company released an official statement through its Twitter account on Wednesday.

“We are aware of the allegations currently circulating within our community related to the FIFA 21 Ultimate Team items,” the statement reads. “A thorough investigation is underway, and if we identify improper conduct, we will take swift action.”

The company says as well that it wants to make its stance clear: this type of behavior is “unacceptable” and it understands how it “creates concern about unfair balance in the game and competition.” EA says it will keep the FIFA community updated as its investigation progresses.

FIFA 21 has been immensely successful for EA, helping the company pull in record profits during the last year.