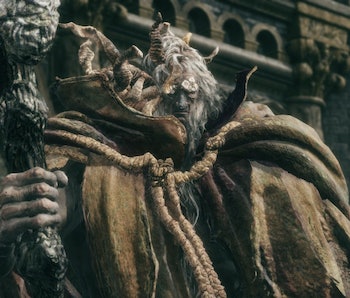 Dark Souls fans are well-known for their love of challenge runs, like beating these games without summoning, using magic, or leveling up. Some take it even further though. One Elden Ring streamer has already beaten several bosses using the Switch's Ring Fit Adventure controller — including one on his very first try.

Running for your life — A streamer who goes by SuperLouis64 is a modder and content creator who specializes in building wild controllers and beating games with them. He's the guy that beat Dark Souls 3 with a banana battery circuit setup, and no, we aren't kidding. This time, Louis has modded the pilates ring controller that comes with Nintendo's fitness game, Ring Fit Adventure, in order to get fit while he dies again and again to the horrors of the Lands Between.

Or maybe not, because Louis was able to beat the optional hypergaol boss Bloodhound Knight Darriwil on his very first try using the controller. While Darriwil is far from the hardest boss you'll find in Elden Ring's starting area Limgrave, he still took me a couple of tries with a "traditional" controller, so I think Louis deserves some major plaudits for this. In a follow-up tweet, Louis showed that he was also able to defeat the first major boss, Margit, with this setup, who is definitely a steep challenge for even experienced Souls players.

If you're curious how the setup works, Louis explained it in another tweet. Basically, he has to continuously jog in place in order to move his character, and he swings or squeezes the ring to attack. That's not all: in order to heal, he has to do a full squat. Overall, it seems like a great way to burn a few calories while your knight runs around, though you'll probably lose feeling in your legs by the time you're halfway done with Stormveil Castle.

In other news, Louis recently built a bow and arrow controller for use with the MMO Final Fantasy XIV, which is pretty damn cool. If you’re wondering if Elden Ring is worth playing, check out our review and tips to get started.