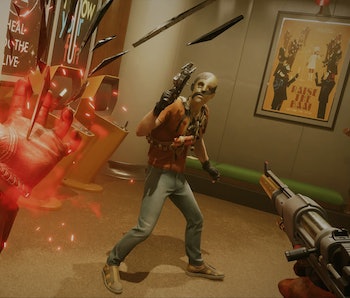 Bethesda’s Deathloop launched earlier this month to huge fanfare from both the critical world and the gaming public. But it’s a PS5 exclusive, which means a huge number of gamers just can’t play it yet. The PS5 is selling well, but it’s also essentially impossible to find unless you have some sort of insider connection.

Jason Kelley, who plays Deathloop lead Colt, knows this problem all too well. The night before the game launched, the game’s official account tweeted a video of Kelley urging gamers to go out and buy a copy on September 14. He also mentioned in the video that he’d love it if someone would help him find a PS5 and a copy of the game so he could experience it for himself.

Bethesda’s Senior Vice President of Communications, Pete Hines, responded to Kelley’s video by suggesting he might be able to help him find a PS5 to play it. Now it seems Bethesda did actually manage to secure Kelley a PS5 and shipped it to him with a copy of Deathloop. We’re pleased to hear it, but it’s also a reminder of the overarching problem... you still have to know someone.

Time to enjoy — As Bethesda’s first full game release since 2017’s Prey and one of the PlayStation 5’s few big exclusive titles for 2021, Deathloop has brought in tons of hype for both Bethesda and Sony. That exclusivity has put the game out of reach for many, though. Even being available on PC doesn’t solve that problem, given the ongoing GPU shortage.

As for the rest of us… — If you, like me, currently own neither a PlayStation 5 nor a top-notch gaming PC, Deathloop is not very near on your gaming horizon.

But all hope is not lost. The game is a timed exclusive, which means Bethesda is only required to keep it away from Xbox consoles until September 14, 2022. Given that Microsoft now owns all of Bethesda games, it’s almost guaranteed Deathloop will make it to the Series X and Series S not long after that year is up.

Kelley’s case — where tweeting about wanting a PS5 ends in one actually showing up on your doorstep — is obviously the exception rather than the rule. I know plenty of people who’ve tried similar tactics (namely, bemoaning their inability to secure one) with no result, but then, they didn’t play any pivotal characters.

Until next September, Xbox can still enjoy the plethora of other Bethesda games available as part of a Game Pass subscription. So there’s that, I suppose.