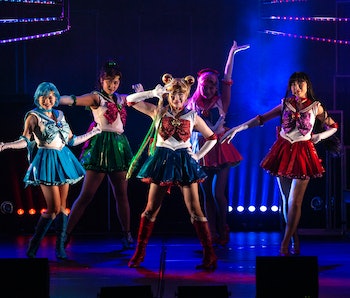 Thanks to the efforts of a group called Supper, a little-known PC Engine Super CD-ROM² visual novel called Bishoujo Senshi Sailor Moon (or Pretty Soldier Sailor Moon) has finally made its way to English-speaking audiences. Released back in 1994, the title was part of a slew of releases for the franchise—many of which never made it out of Japan.

The release of a fan-made patch for the "adventure-style digital comic" notes that the patch includes a complete English translation for all in-game text, subtitles for scenes with voice acting, and both transliterated and translated subtitles for the soundtrack — a labor-intensive process that likely took months of concerted effort.

There are also two versions of the patch, a standard one and an "honorifics" patch that includes slightly less English localization for those wanting all the authenticity they can get. Also included in the release is a large gallery of cut or unused content stumbled upon during the translation process, which can be accessed via a cheat code.

Sailor who? — For those unfamiliar, Sailor Moon is a wildly popular manga and anime series that follows the adventures of a team of magical girls as they fight off various supernatural threats. The release describes the game's plot as follows:

Following the Makai Tree incident and the departure of Ail and An, the five Sailor Senshi enjoy a newfound period of peace. With no enemies to fight, they return to their colorful, but ordinary, daily lives. But one night, Luna and Artemis sense several mysterious shadows releasing dark energy – energy like that of a Youma. Could the vanquished Dark Kingdom have somehow returned? The Senshi have dark secrets to uncover, and enemies old and new alike to face… if they can ever stop goofing off at the arcade.

Though the patch will work with images of the game disc that anyone can find online with a simple Google search, the pseudo-legal way to go about experiencing the game includes ripping it off an official release copy of the CD into a BIN+CUE, IMG+CUE, or ISO+WAV+CUE disc image for use on original Turbografx-16 CD or Duo consoles, a Japanese PC Engine Super CD-ROM², or an emulator (check out our recommendations if you're not familiar with emulation software like RetroArch).

Because the Turbografx-16/PC Engine line of consoles has no copy protection, you'll have no trouble using a burned disc. Or you can, you know, just emulate it.