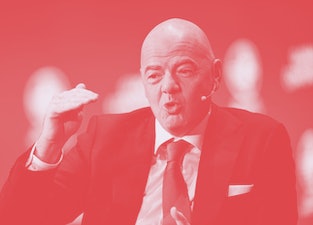 When FIFA's own simulation soccer game will be released.

A day ahead of EA’s announcement that it would be splitting up with FIFA after working together for close to 30 years on annual soccer simulation titles that famously bore the FIFA name, the international governing body for association soccer hinted at what was about to become official. In a press release that now reads like FIFA trying to keep the breakup amicable, Gianni Infantino, FIFA’s president, confirmed his organization is “currently engaging with leading game publishers, media companies, and investors” to put out a rival game in 2024 to compete with EA Sports FC.

The timing is interesting here given that the latter is supposed to make its debut in July 2023, which suggests that FIFA will take at least a year to work out the ins and outs needed to make a quality simulation soccer game.

Aside from confirming the release of an EA competitor, there was an emphasis on the expansion of the FIFA brand in the digital space, with a range of non-simulation games set to launch during the latter half of this year. One of them will be focused on this year’s World Cup in Qatar, while future projects may target next year’s FIFA Women’s World Cup.

I’m not mad, you’re mad — Cam’ron, member of the Diplomats and one of the greatest individual rappers of all time, long ago set the blueprint for how to conduct oneself not just on television but online, when he posited to Bill Murray that he was in fact mad and laughed at his expense. Murray was trying to link real-world violence to hip-hop, claiming that the latter is to blame for influencing the youth to commit crimes.

While this boring talking point has been debunked over and over, Cam’ron made it clear that while under public perception, you cannot allow emotional responses to undermine your messaging, otherwise people may not take you seriously. This seems to be the approach FIFA is taking.

It’s evident that Infantino wants to keep the public perception of FIFA’s split with EA as a friendly one while still winning the breakup. Take the statement’s opening for example:

The FIFA name is the only global, original title. FIFA 23, FIFA 24, FIFA 25 and FIFA 26, and so on — the constant is the FIFA name and it will remain forever and remain THE BEST.

He attributes the success of the FIFA video game series to the name FIFA alone, implies its power is immortal, and uses capitalization to punctuate his statement. U mad?

It makes sense given that EA will not have to skip a beat, and intends to drop EA Sports FC as soon as its partnership with FIFA comes to a close. Meanwhile, FIFA will have to figure out how to make a distinctive simulation soccer experience and will miss out on a year’s worth of revenue in 2023 as it works to debut its own game in 2024.

Throw in the fact that EA also has licensing agreements to incorporate all of the biggest soccer clubs and players in the world, with some of those clubs even demonstrating their support in the wake of the breakup, and it is clear who the winner is right now. Infantino’s comments are only good for a four on the “U Mad,” scale, but things could heat up depending on how FIFA’s simulation development goes over the next year.