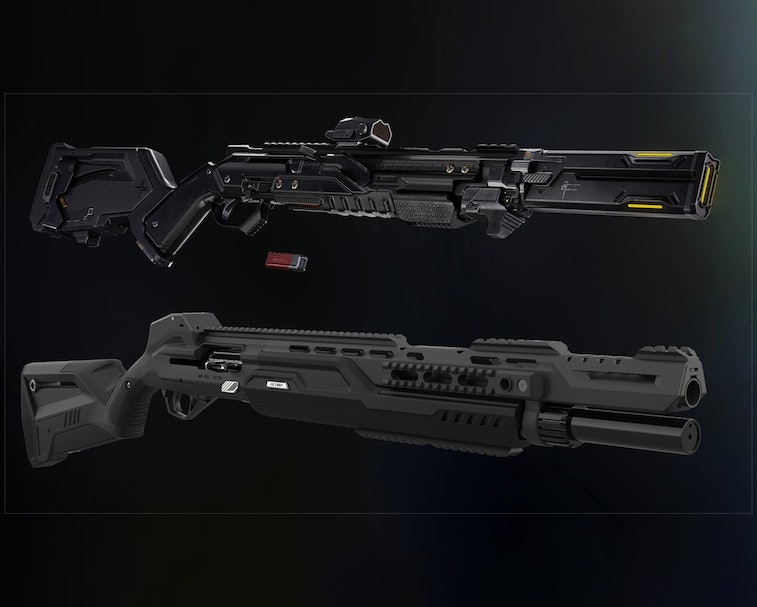 A developer of an upcoming video game has accused weapons manufacturer Kalashnikov Concern of stealing its design for a real-world shotgun. In a lengthy interview with IGN, the CEO of Ward B — the studio behind Oceanic, an in-development hero shooter — says that a contractor for the Russian arms giant approached Ward B and asked for permission to turn the game's Mastodon shotgun into a real-life weapon kit. However, the deal was never finalized between the two companies.

When Kalashnikov announced the MP-155 Ultima shotgun in August 2020, however, CEO Marcellino Sauceda says that staffers at Ward B immediately noticed similarities between the fictional Mastodon and the very real MP-155. Sauceda cites apparent similarities in the handguard and receiver of the two weapons, as well as a small L-shaped indentation on one side of both guns. The indie studio tried to take legal action against the much-larger weapons company, including cease and desist orders and DMCA takedowns, but that quickly went nowhere.

Fishy business — Kalashnikov contractor Maxim Kuzin told IGN that he abandoned his plan to work with Ward B because he felt that the studio was too small and unproven to partner with. He further asserts that he worked with another designer in Russia to create the Ultima's design "from scratch," going so far as to send IGN proof of the weapon's originality from the Russia Designers Association.

However, Ward B uncovered some evidence that would appear to undercut Kuzin's claims. For example, Sauceda has obtained an email exchange that seems to show Kuzin trying to buy the design for the Mastodon from the concept artist who created the mock-up for the gun. (The design is owned by Ward B, not the artist.)

There's also a flowchart that includes the Mastodon, the original MP-155, and a number of other weapons designs, that appears to show the process of combining the two guns into a new weapon. Another message obtained by Sauceda appears to show Kuzin trying to convince another artist in order to create a design similar to the Mastodon.

From game to life and back again — In an ironic twist, the MP-155 Ultra is now available as a weapons kit in the popular tactical shooter Escape from Tarkov. To Sauceda, this basically means that a modified version of Ward B's weapon made it into another video game before his studio got a chance to put it into Oceanic. Sauceda further says that he's given up on legal action due to the cost of litigation and the international nature of the dispute.

As a whole, it's hard to know what to make of all this: while the two guns do look similar at a glance, most video game weapons tend to share aesthetic parallels, especially in modern FPS games. Regardless of the legal concepts at play here, it's pretty clear that indie studios might need to be a bit more protective of their high-quality assets and models, because you never know who might be "inspired" by them — or if you'll be able to stand against a company with far more money than you.

More like this
Steven Wright
9 hours ago
Gaming
Amid the crypto crash, should you buy a used GPU?
Jackson Chen
6.23.2022 7:20 PM
Gaming
Everything we know about the PS5 Pro Controller
Steven Wright
6.15.2022 12:00 AM
Hype life
Is anybody actually excited for PlayStation VR 2?