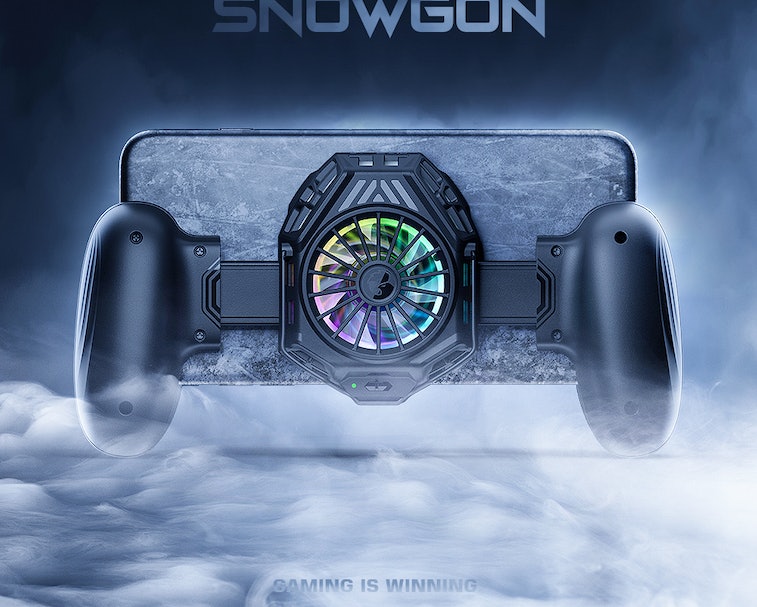 Phones can overheat if you play serious games like Genshin Impact or Fortnite. But what if your phone didn’t and your fingers could remain cool?

GameSir's F8 Pro Snowgon, currently crowdfunding on Indiegogo, is a controller grip with a built-in battery and — according to the company — the world’s first cooling fan in such an accessory. It’s a plug-and-play solution for mobile gamers who might want to keep their phone cool after a few hours of playtime. Whether the cooling fan really does anything to improve performance is a different question.

Chill out — Unlike other phone fans on the market, such as the AeroActive Cooler 5 for the ASUS ROG Phone 5, the F8 Pro uses “advanced semiconductor refrigeration technology” that, according to the project page FAQ, can begin cooling down phones within one second of it being properly connected. Instead of blowing out air to cool down the phone itself, the F8 Pro has a cooling element that makes contact with the phone; the fan then dissipates the heat on the semiconductor.

Meanwhile, the grips simply make it more comfortable to hold your phone when playing — there’s even a removable joystick! The F8 Pro Snowgon is designed to fit phones between 100mm to 173mm in length, which, in American, translates to 3.9 inches to 6.8 inches. Also, let’s not forget about the most enticing feature for “real” gamers: the color-changing RGB backlight.

As of this writing, the F8 Pro campaign on Indiegogo has 25 days to raise $10,000, though it’s a Flexible Goal, meaning the team gets to keep whatever money is raised regardless of reaching the milestone. Early backers can snag one of these for 22 percent off, which knocks down the price from $45 to $35 — perks with larger orders will receive a higher discount. Backers will also receive finger sleeves, or Talons, that, I guess, help with gaming on a touchscreen in some way. Currently, delivery is planned for late August.

Not cool, bro — Mobile gaming has spawned a whole sub-industry of gaming phones, controllers, and other peripherals, especially abroad where mobile gaming is far cheaper than purchasing a console or gaming PC. GameSir is one of those companies capitalizing on mobile gaming, recently making a Bluetooth controller that we enjoyed. But I’m skeptical about the F8 Pro mostly because there is not a single benchmark or statistic on the project page that points to real-world performance.

I get the cooling tech works differently from other phone fans, but, when we’re talking about measurable data such as SoC temperature and clock speeds, the least GameSir can do is provide some benchmarks. It’s not hard to download 3DMark or Geekbench to test the cooler and, while phones and benchmark conditions may vary, it’s a red flag the company conveniently didn’t include any. A performance graph including the flagship Samsung, Google, OnePlus, and Apple phones would have provided some reassurance that there’s a measurable cooling improvement with the F8 Pro Snowgon.

There isn’t even any mention as to how this product stacks up against cheap phone coolers on Amazon, which is maybe one of those low-hanging marketing strategies GameSir could have done to make its product look better. A comparison with the AeroActive Cooler 5 would have been another great selling point, too, since that’s a $70 product that reviewers thought was okay at best and stupid at worst.

A built-in kickstand can be used to prop up the phone. GameSir
Every backer will receive a joystick, which is optional. GameSir
The F8 Pro is rechargeable via a USB-C cable, which is included. GameSir

Blowing smoke — The grip looks fine and should help with comfort; it’s great that you don’t need an app to get it working on Android or iOS phones. The flip side of not having an app is there is no way to manage the fan speed and noise, nor is there a way to customize the RGB lighting or turn it off. At least the device has its own battery that doesn’t drain the phone, but the campaign doesn’t mention battery life or if there is a battery indicator.

With only marketing to go by at this point, it’s too early to reach a final verdict, however. It’s possible the F8 Pro is a rare gem and the cooler really works. Testing it is the only way to find out. Still, a lack of benchmarks is definitely suspicious. If you want to check it out for yourself, there are still 25 days left to back the project, but like all crowdfunding, you do so at your own risk.