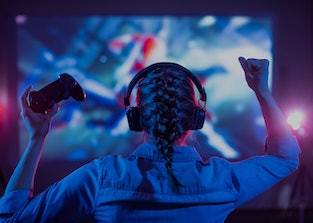 How many hours of game-related content users watched in 2020.

YouTube Gaming is no longer a little streaming platform that could. The amount of gaming content watched on the site in 2020 was double that from 2018, with more than 100 billion hours watched. That figure includes 10 billion hours of live-streamed gaming content, where more than 40 million gaming channels are now actively streaming on a regular basis.

In an interview with VentureBeat, the head of YouTube Gaming, Ryan Wyatt, boasted that it's not just a few big names drawing all the attention — the platform has a long-tail of creators who have found success. More than 80,000 creators on YouTube Gaming have hit at least 100,000 subscribers, while more than 5,000 have reached five million subscribers. More than 350 creators, meanwhile, have reached 10 million subscribers.

Catching up to Twitch — YouTube is the leader in user-generated video but fell behind in recent years to Twitch in the gaming category. Though YouTube Gaming has grown quickly, Twitch remains the biggest platform for game streaming with 65 percent of total hours viewed for the sector at the beginning of the year according to the company's own reports. Still, YouTube might only have a third of the traffic — 1.1 billion hours watched as compared to Twitch's 3.1 billion hours — but its rapid growth makes it the fiercest challenger in an increasingly crowded market, with Facebook also competing for share.

The Google-owned company has been drawing attention by landing deals to host major esports competitions from the likes of Blizzard, the publisher of Call of Duty and Overwatch. It's also hosted charity tournaments to benefit coronavirus relief efforts.

New reports suggest that Google's Stadia will soon allow users to begin streaming their gameplay to YouTube with a press of a button, a feature that will make it much easier for anyone to try out streaming without the need to download complicated software. The timing could be ideal as the much-anticipated game Cyberpunk 2077 is slated to launch on Stadia (and everywhere else) on December 10.

Twitch's parent company Amazon has also launched its own cloud gaming service called Luna to rival Stadia, but it's still nascent. Twitch has struggled with licensing issues of late, as creators on the platform faced a wave of takedown notices over copyrighted music appearing in their streams. Another competitor, Facebook Gaming, recently signed deals allowing creators to use copyrighted music in their streams without having to worry about potential copyright infringements.

The next frontier for Google — Tech companies are eager to get in on the lucrative gaming market, where live-streaming alone generated an estimated $40 billion in revenue globally last year. With new cloud gaming services, Google and others are effectively able to enter the console market without needing to market and sell their own consoles. They instead offering immediate access to games to anyone with a decent enough internet connection and a smartphone, tablet, laptop, or other hardware they likely already own.

Success in the game streaming segment could mean a new, potentially very lucrative revenue stream from game sales, recurring subscriptions, or a mix of the two... which explains why the ongoing landgrab is being so fiercely contested.