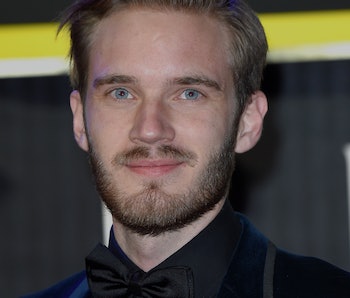 Google on Monday announced it's signed YouTuber PewDiePie to an exclusive streaming deal. The terms of the deal were not disclosed, but given his gargantuan following and live-streaming platforms multi-million dollar claims on other gamers, many zeros were doubtless involved. The scandal-prone streamer has largely stayed out of the headlines lately, whether because of good behavior or because he's not been especially newsworthy in the face of a pandemic. We're not sure which. Either way, the news marks the end of his DLive streams.

Diminishing Pewd feuds — Felix “PewDiePie” Kjellberg has long hidden behind the shield of comedy / trolling as a way to distance himself from the consequences of the far-right dog whistles (sometimes sirens) that follow him. When reporting by The Wall Street Journal resulted in the severance of a lucrative Disney deal and the cancellation of his YouTube Red show in 2017, he issued an apology while also taking an anti-media stance.

Kjellberg hasn’t hurt for followers, currently boasting 104 million of them, but YouTube has largely shown him the cold shoulder in recent years. Despite his continued popularity, he’s been notably absent from YouTube's annual end-of-year Rewinds round-ups.

Playing it safe — In a New York Times interview, Kjellberg seemed to finally reckon with the power of his platform following the fallout of the New Zealand mass shooter showing outright support for his channel. Starting last fall, Kjellberg began to pull away from controversy, even toying with taking a break from YouTube altogether. Within 30 days, though, he returned, and his 2020 videos — largely about Minecraft — have evidently been clean enough to get him back in YouTube’s good graces.

Kjellberg is part of a class of prominent YouTubers like the Paul brothers who leaned into videos crafted for shock value to fuel meteoric growth. For PewDiePie, the nefarious nature of these actions lies not in the notion he ever believed in the hate he jokingly espoused or “satirized.” It lies in the commodification of hate to yield a massive, bipartisan following, and his subsequently defensive lack of accountability.

Streaming wars — YouTube is likely hoping this deal will result in comparable mutual gains like the deal between Tyler 'Ninja' Blevins and Microsoft’s Mixer. Blevins, a popular Fortnite streamer, wasn’t squeaky clean; he famously dropped the n-word during a Twitch stream and stated he avoids streaming with women. In Blevin’s case, however, these offenses lie more in Misguided White Guy territory.

While Kjellberg has also used the slur, it was contextually pejorative; Blevin inserted it into song lyrics. Additionally, Blevin’s Pence-like stance on streaming with women was meant to circumvent online harassment for them and his wife. While still in bad form, these instances speak to a cultural ignorance rather than a longstanding pattern of harmful offenses with the power to incite violence.

YouTube's throne is under threat — YouTube is losing a little ground, as Facebook Gaming and Mixer edge upwards in their minority streaming market shares. Behind Twitch’s 73 percent share, YouTube Gaming is a distant second at 21 percent, but both giants lost a sliver of their 2018 standings last year to rivals.

YouTube scooped up CouRage, Lachlan, LazarBeam, Muselk, Typical Gamer, and Valkyrae, who only have 140 million subscribers combined. When the devil you know has 104 million people at his beck and call, making a deal feels easier than, oh, let’s say, building an enticingly competitive product.

YouTube Gaming wants to ride PewDiePie’s coattails to strike at Amazon’s dominance with Twitch. His future behavior will show if he’s truly changed or if YouTube is just setting itself up for more scandals — at the expense of its marginalized communities. We may not have to wait long to find out which.