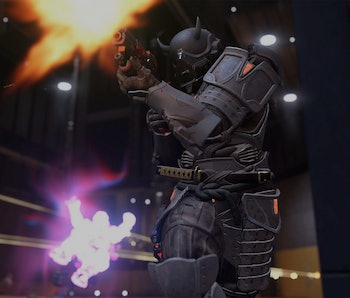 Yesterday, Xbox Game Studios provided an update on how certain titles would function on Valve’s new Steam Deck device. The good news? Only four games were listed as unsupported by the handheld PC. The bad news? Halo Infinite is part of that list.

While details were sparse, the reasoning for this incompatibility was simply listed as “due to anti cheat.” Aside from Infinite, the other three games that will not be supported by Steam Deck include Gears 5, Halo: The Master Chief Collection, and Microsoft Flight Simulator X (which was released in 2006).

In the announcement, Microsoft noted that it would be up to individual developers to integrate their games into the Steam Deck ecosystem and provided another, more robust list of all the titles that are compatible with Valve’s shiny new toy.

Deathloop, Psychonauts 2, Hellblade: Senua’s Sacrifice, Prey, and Battletoads are some of the games that are listed as “verified,” while Fallout 4, Forza Horizon(s) 5 and 4, and Sea of Thieves were among a handful of games listed as “playable.”

Believe the hype? — It is rather telling that something like the Steam Deck, which was released amidst a mountain of hype, expectations, and sold-out pre-orders (don’t worry, you didn’t lose your place in the queue), wasn’t immediately lambasted by the gaming media machine. The early returns seem to be favorable — and a large part of the handheld’s appeal will be its cache of playable titles.

Speaking of playable titles, a Steam community forum post from last week highlighted the fact that there are already 1000 verified/playable titles for the portable console. One interesting piece of information in the post outlined Valve’s existing standards for titles to receive a verified or playable rating.

If a game shows controller glyphs 99% of the time but tells you to 'press F' sometimes during gameplay, that's Playable, not Verified. If 99% of a game's functionality is accessible, but accessing one optional in-game minigame crashes, or one tutorial video doesn't render, that's Unsupported.

From the description above, it seems the standards are fairly rigorous but Valve would prefer a world where there may be some “false negatives,” rather than “false positives.” Additionally, the company expected “many titles to transition over the next few weeks from Playable, or even Unsupported, to Verified.”

Whether that indicates Infinite could become playable at some point on Steam Deck is another question entirely, but hopefully “anti-cheat, isn’t something that will prevent the shooter from working on another platform indefinitely.