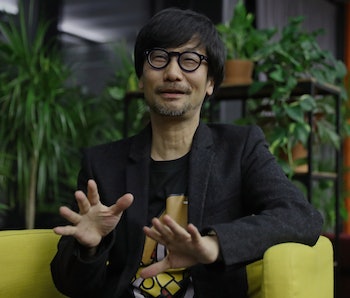 Hideo Kojima, the creator of the Metal Gear Solid series as well as Death Stranding, has always designed his video games with a grand, cinematic approach. They are heavily-involved worlds that often prioritize storytelling and the playing experience itself. More often than not, you might find yourself assessing how a Kojima project made you feel rather than whether or not you enjoyed playing it. So it comes as no surprise that the game designer has now expanded his studio to include a division focused specifically on film, TV, and music.

As first reported by gamesindustry.biz, the new division will be helmed by Riley Russell, who has worked at Playstation in a number of roles, including Chief Legal Officer, for close to 28 years.

“The team has as its charter, the goal of expanding the reach and awareness of the properties now under development at Kojima Productions, and to make them even more a part of our popular culture,” he told the publication.

Seamless Transition — This expansion by Kojima Productions is well in line with everything the auteur does. There’s plenty of source material to work with — Metal Gear is already known for its story just as much as it is known for its gameplay. Meanwhile, Death Stranding, a game that could be turned into a short film by ripping its cutscenes, received a director’s cut edition this past September.

Yoshiko Fukuda, who works as a business development manager for Kojima productions, said of the vision for the new studio division:

Finding new ways to entertain, engage and offer value to our fans is essential in a fast-moving, ever changing storytelling world. Our new division will take the studio into even more areas that present our creative narratives beyond videogames and to open up ways for our fans to communicate and immerse themselves in these spaces.

With all of that being said, I wouldn’t expect a Kojima film, television, or musical project anytime soon, considering the designer is notoriously meticulous with his output. Since the formation of the independent Kojima Productions in 2015, the studio has released one game: Death Stranding.

Instead of waiting for a movie based on any of Kojima’s titular characters, why not dress like one? It will make the time pass by quicker.

More like this
Steven Wright
5.25.2022 11:37 PM
Old souls
These are the 10 most-played games this year (and Elden Ring isn’t one)
Steven Wright
5.24.2022 9:15 PM
Pay the piper
Sony is stiffing PlayStation Plus users with surprise upgrade fees
Steven Wright
5.23.2022 7:30 PM
Stick to emulation
PS Plus apparently has retro filters, trophies and more