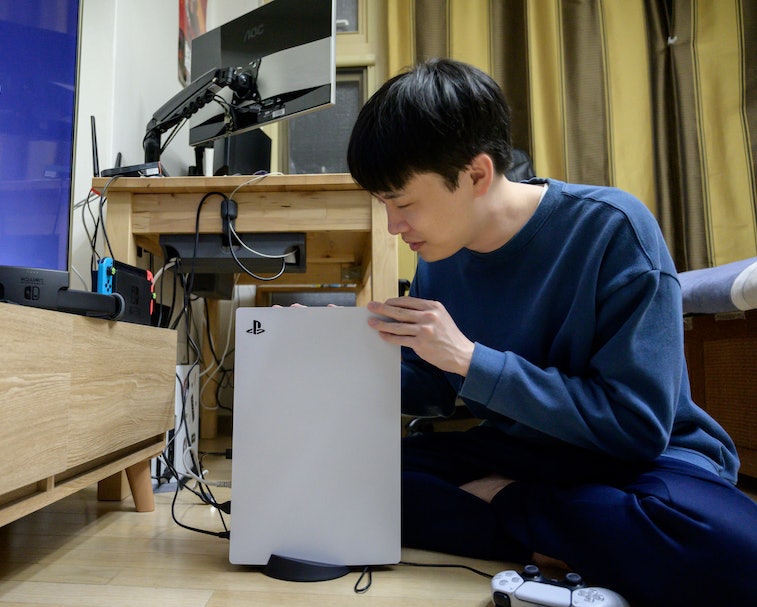 The PlayStation 5 and new Xbox Series X/S consoles are incredibly impressive machines. They can churn out gorgeous new graphics thanks ray tracing, boast super fast load times, and display gameplay locked at 60 fps. Thanks to these new boxes, these features are now in the hands of more consumers than ever before.

If you’re like us, however, you’re probably already wondering what’s next on the horizon. The last console generation introduced the mid-cycle upgrade, where notably improved consoles were released without marking a new generation. So using that logic, we decided to create a PC build that would to try and simulate what a mid-cycle hardware refresh during this new generation could bring to gamers.

At launch, both the PS5 and Xbox Series X can run 4K games at 30 fps with ray tracing or at 60 fps without ray tracing — with a handful of titles able to reach 120fps with some resolution tweaks and optimization. This PC build aims to exceed these existing targets to show what a notable upgrade later on this generation could look like.

We’ll be following the logic laid out by Sony’s Mark Cerny in 2016 for our full build and highlighting our most notable choices here. Our final price tag came out to less than $2,000. Let’s begin!

A powerful CPU similar to the ones in the PlayStation 5 and Xbox Series X.

The PS4 and Xbox One’s CPUs were their worst components by far. AMD’s Jaguar Architecture was, well... lacking to say the least. This makes the Zen 2 cores found on PS5 and Xbox Series X/S arguably the biggest upgrades this generation.

When designing the PS4 Pro, Cerny pointed out that switching to a new architecture would, in his eyes, be a part of a new console generation. So, Sony and Microsoft both chose to keep the core-count of their Jaguar CPUs the same and simply increase the clock speeds of the existing CPUs as much as possible (thanks in large part to new thermal designs). It would make sense if that remained true for mid-cycle hardware refreshes during this generation.

The 3800X is an 8-core Zen 2 CPU like the ones used by the consoles but clocked at 3.9Ghz versus the 3.5Ghz and 3.6Ghz base clocks of the PS5 and Series X, respectively. This is basically the best-case scenario for how high Zen 2 can be clocked before its core-count would need to increase.

A powerful GPU similar to the ones found in the PlayStation 5 and Xbox Series X.

While the PS4 Pro and Xbox One X only received minor CPU upgrades over their counterparts, their GPU changes were their most impressive attributes. Thanks to these boosted GPUs, both consoles could play games at a 4K resolution (albeit with some tricks like checkboarding) with relatively stable frame rates. The RDNA 2 GPUs inside the next-gen consoles are even more exciting.

But it's important to note that both Sony and Microsoft have done a lot of work customizing and optimizing the RDNA 2 GPU's performance for console gaming. Unfortunately, there really isn’t a 1:1 comparison between the console GPUs and ones sold directly by AMD.

In any event, the 6800 shouldn’t have a problem exceeding 60 fps at 4K. It has 60 compute units (CU) more than either GPU used by Sony or Microsoft (36 CUs for Sony and 52 CUs for Microsoft). Where these cards run into problems, and where the customizations done by the console makers will be seen the most, is when ray tracing is turned on. The 6800 struggles to deliver 4K and raytracing on the PC, requiring dropping your resolution if you really want to increase frames with raytracing turned on.

Yes, the architectures here are identical but console developers are able to have much more control over how components are used in games, and that yields more stable performance. It’s possible RDNA 2 on PC will improve with game updates, but there’s no guarantee of that. If we were just recommending a good PC build under $2000, then the RTX 3070 or 3080 would be our pick — but if you’re trying to stay true to the consoles, AMD is really the only choice here.

A fast motherboard featuring WiFi 6 and I/O that closely matches the PlayStation 5 and Xbox Series X.

B550 is AMD’s consumer-focused motherboard chipset that focuses on bringing the speedier PCI Express Gen 4 interface to where it matters most. The chipset only uses PCIe 4 for SSD storage and for GPUs. Since PCIe4 is the same interface used by the next-gen consoles for their SSD implementations, it’s basically required if you’re trying to get anywhere close to the consoles in your build. While any B550 motherboard will bring PCIe4 storage and graphics, we picked this ASUS board because of its use of WiFi 6 (which can be seen on the PS5) and I/O that closely matches the next-gen consoles as well.

A wicked fast 1TB SSD, similar to the ones found in the PlayStation 5 and the Xbox Series X.

This is another area where there isn’t really a 1:1 match for what is being used in the consoles. Both the PS5 and Xbox Series X have SSDs that utilize PCIe 4 to interface with the CPU but they also implement customizations that exceed the capabilities of conventional SSDs. The PS5’s SSD is so advanced, Epic CEO Tim Sweeney thinks it will drive how the PC Gaming market uses SSD storage in the future. So, without real parity to what the consoles are using, our recommendation is just to get the fastest SSD possible using PCIe 4. Currently, that’s the Samsung 980 Pro, with claimed read speeds of 7GB/s and write speeds of 5GB/s. While those speeds are actually faster than the speeds of the PS5’s internal SSD of 5.5GB/s, the PS5 is also using 6 controllers for the SSD, where conventional drives use 2 — hence the lack of true parity.

With memory, there is quite literally no way to really compare what is in a console to a PC. PCs use removable DDR4 sticks while the consoles are using GDDR6 memory that is soldered to the motherboard and shared with every other component in the console. You can find GDDR6 in a PC but only as dedicated memory inside your graphics card, with everything else leaning on the DDR4 RAM in your motherboard. GDDR6 is also significantly faster than DDR4 with much higher bandwidth. Our build has 16GB of Crucial Ballistix memory with fairly low latency clocked at 4400Mhz (the maximum speed supported by our motherboard of choice) since AMD CPUs tend to outperform on higher clocked RAM. You can go faster than 4400, but it will get very expensive very quickly.

A compact PC case with a chic, minimalist design.

The estimated power draw for this full build is about 510W, but the RX 6800XT recommends at least 700W for the power supply. Also, while we'd chose the minimalist NZXT H510 case for its great reviews and its attractive matte black and white finishes that can match either an Xbox or a PS5’s aesthetics, any ATX case should fit the parts selected, just be sure that your case of choice has good airflow. As for RGB lighting, we leave that to you. Happy building!