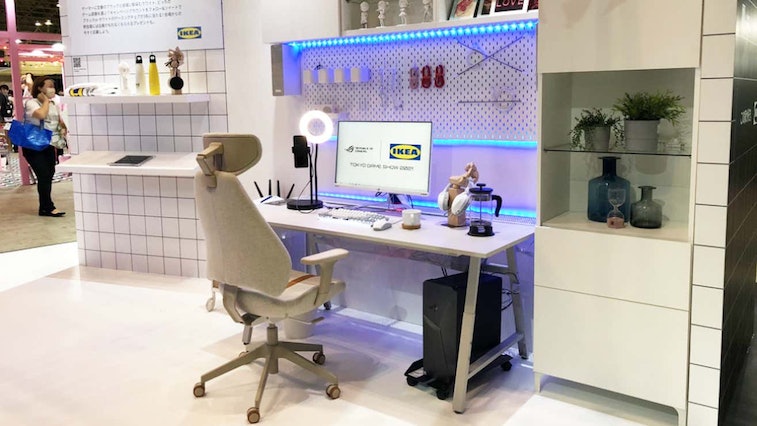 Ikea sees gaming as an untapped market for its simple yet functional furniture, and earlier this year partnered with ASUS’ Republic of Gamers brand to debut a series of products like standing desks and gaming chairs. Perhaps to emphasize its seriousness about entering this market, Ikea made a surprise appearance at the 2021 Tokyo Game Show, where it had a small booth contained within ASUS’ area, Gizmodo reported. The booth served as a place to show off the full line of products, thirty items in total.

Unfortunately, due to the pandemic, this year’s Tokyo Game Show was mostly held online; the in-person show floor was only open to press and other industry insiders. But it’s still interesting to see that a furniture company synonymous with affordable basics was there.

Gaming furniture — Ikea isn’t exactly known for making things that are super high quality. In fact, it’s really thought of as a purveyor of disposable furniture that you’ll eventually grow out of and into more long-lasting tables and other goods as you get older and settle down. But the gaming products that it has unveiled actually look fairly good, and some will like that they are less garish than other gaming furniture tends to be, with accents like bright neon colors and RGB lights. The Ikea line is subdued in comparison.

Ikea has been doing more collaborations in general, such as with the release of its table lamp that features an integrated Sonos speaker. These types of partnerships help the furniture company to create affordable products that still pack a punch, as it can combine other companies’ expertise with its own skill at driving down costs to make something that’s not great but good enough.