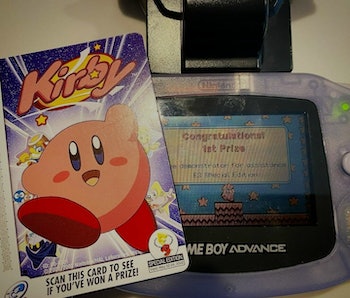 Nintendo nostalgia has generated a ton of cash in recent months. Earlier in July, a sealed Super Mario 64 sporting a WATA 9.8 A++ rating was auctioned for a whopping $1,560,000, with an early copy of The Legend of Zelda going for $870,000 only a few days earlier. Similarly impressive sales for other retro NES titles like Super Mario Bros. and Super Mario Bros. 3 have also been reported, but the newest ultra-rare Nintendo item apparently isn’t even a game: it’s a potentially one-of-a-kind Nintendo e-Reader swag item featuring our beloved Kirby given out nearly 20 years ago during E3 2002.

The Kirby card was distributed randomly among e-Reader packs given out by Nintendo reps during the convention. A scan of the rare card with one’s GameBoy Advance e-Reader attachment prompted a first-place congratulations message, with instructions to see one of the reps for a prize — reportedly a Limited Edition Gold Gameboy Advance Pokemon/NYC Store Limited Edition handheld, which sounds pretty badass, to be honest.

To prevent scams or duplicate awards, the Kirby cards were collected, then presumably destroyed, meaning only a handful actually survived that year’s E3... and one of which made its way to eBay late last week. At the time of writing, the highest bid for the card is $7,700, but with three-and-a-half days left of bidding, that price is undoubtedly gonna get much higher before all is said and done.

Remember the Nintendo e-Reader? — For those who need a refresher (including us) Nintendo’s e-Reader add-on was first released in Japan circa 2001 before its stateside debut the following year. The device connected to GameBoy Advances, and used an LED scanner to read cards printed with encoded data strips akin to barcodes.

Collectible cards were generally used to unlock secret items, features, and minigames for whatever title a user was playing — all of which were stored on the cards themselves and not the source games. U.S. examples included new trainers for Pokémon Ruby and Sapphire, new items and designs for Animal Crossing, and an exclusive version of Mario Party.

Suffice to say, the e-Reader never exactly caught on as intended, despite marketing gimmicks like the promotional E3 Kirby card given out in 2002. Of course, time heals all wounds, and now there’s at least a handful of people out there willing to shell out God knows how much money for an extremely obscure piece of video gaming history.