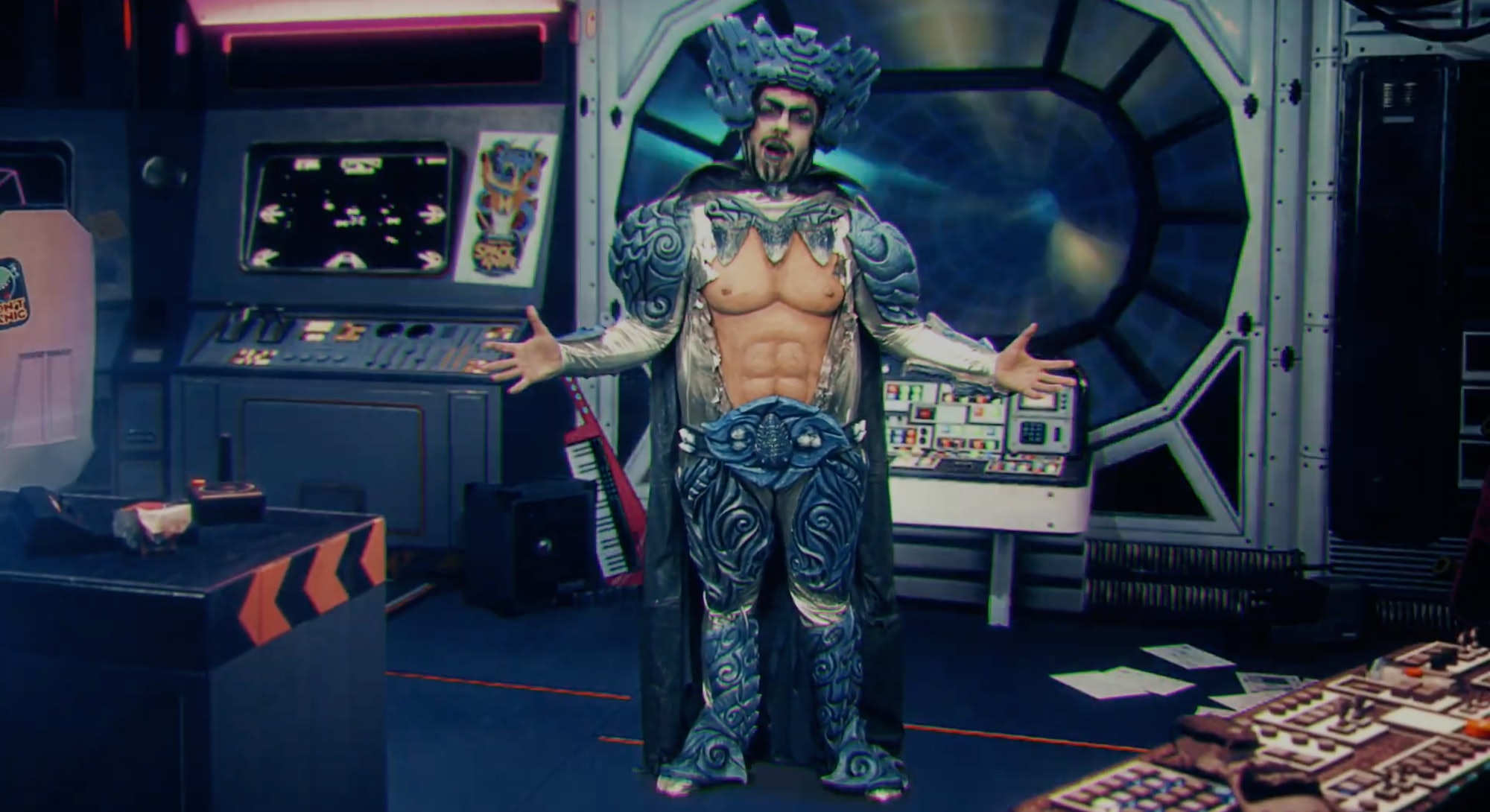 Sitting atop his throne of Fantastic Beasts, The Walking Dead, and Fanboys, actor Dan Fogler is a modern prince of geekdom.

So, it's as natural a fit as can be expected to see him suited-up in outer-space battle armor and Gaga-esque warpaint, summoning eSports athletes and fellow celebs into a gaming thunderdome on Amazon Prime Gaming's new Crown Channel program Clicksport-1.

With the massive popularity of eSports and Twitch streaming, it's shocking that Clicksport-1 hasn't happened sooner. The show, which debuts September 23, consists of three days of competition — each of which introduces a new game genre (massive multiplayer game World of Tanks, survival zombie game Last Day on Earth, and third-person action game Warframe). Throughout the competition, teams of five “nations” repping a fictional region of the larger gaming world will battle it out to be declared the best gamer in the known universe.

In the show, Fogler plays Xoc Aventus, "a Digi-God of transmission from the far away Rigel system who encountered Earth’s Wi-Fi waves from the first iteration of Kings Quest released in 1980 under the title Wizard and the Princess. Xoc soon developed a bad case of Respawning due to the mass intake of Wi-Fi. Over the last 50 years, Xoc developed the CLICKSPORT-1 by using Wi-Fi to teleport top streamers into battle for Xoc’s gaming pleasure. Xoc gathers all Nations of space to fight in the CLICKSPORT-1 Tournament of Grandiosity." Yup, judging by his sci-fi drag, that sounds about right!

Input got the chance to chat with Fogler in the run-up to the show.

Ryan: So as you know quite a bit about the end times from The Walking Dead, how has your 2020 been going?

Dan: Oh yeah. It seems like that's what's coming in November, right? It's like every day there's just something new to just make 2020 the most horrible year ever and, fuck, there'll probably be some other plague, and then earthquakes, something like that, and then the dead will rise. The dead will rise from their graves, and then aliens. That's what I'm expecting for the new year.

So how am I prepared? Well, there's certain key phrases that we're listening here for. As soon as I hear them, basically martial law-related, that's when I head for the hills. I've got a bug-out plan. They don't allow guns here, so I've been stocking up on a hell of a lot of fireworks. I just have just boxes of projectiles, like firecrackers, stuff like that. It's basically like Home Alone over here. I'm booby-trapping my house in case things get crazy. But I think if things get really crazy, we're just caravanning off to Stonehenge, which I think would be a good location to be ready for the aliens. I think that's a good spot, Stonehenge.

“The dead will rise from their graves, and then aliens.”

Ryan: Clicksport-1 sounds like it'll keep you distracted. Can you tell me how you got involved in the project and what drew you to it?

Dan: Oh man. It's so funny, because it's kind of great. So the guys who were the brainchild of this thing, I used to do improv with, and we made crazy, silly sketch comedy back in the day. Now it's paying off 20 years later. It's crazy. So this guy is now in charge of content. We're all working together again — and it's for Amazon Prime Gaming's Crown Channel, which is a new thing. They're combining sketch comedy with a tournament-style gaming scenario that people dig, and it's experimental. It's fun, man. It's like, if you're a fan of Super Friends and Power Rangers, that over the top, crazy costumes, wild characters from outer space. My character's like a combination of, I'd say Jeff Goldblum's character from Thor: Ragnarök where he brings everyone together for the tournament, and Khan from Wrath of Khan. The last time I saw Wrath of Khan was probably like ten, fifteen years ago. I always loved that character, and I was like, "Man, let me sharpen up my impression here."

Ryan: As someone who's done Broadway, and prestige TV, and blockbuster movies, is there a little bit of freedom being able to scale everything back and work on something that's smaller for a little bit because everything has to be constrained right now?

Dan: I found a lot of the positive things that came out of this lockdown are how people got creative in this situation to still reach out to people and keep their shows going. I started my own, I guess, videocast? I had a podcast, the Dan Fogler's 4D Xperience! podcast, and I switched over to a videocast. I'm having a lot of fun with that. It's like my own little late-night talk show. And then stuff like this, where, like I said, I'm like Zordon from Power Rangers where I come onto the big screen, and I demand that people play for my pleasure, and my minions are looking up at me.

It just so happened that it worked out. I was able to do it from here in the UK. It's all on green screen, and they're shooting a lot of it in Atlanta. And we're doing it piecemeal and from all over the world. It's kind of like Voltron: all these different pieces are coming together. We crafted it to this situation, and I don't know, it's cool. There's a lot of creative ingenuity going on. I appreciate that everyone just keeps on keeping on.

Here in London, it's, "Stay calm and carry on." I feel like that's what we're doing. I've been doing a lot of virtual Comicons. We're not going to let this stop us enjoying our pop culture.

Dan: Video games for me, in my early life, all through my teen years, I've had a battle with. If there were a rehab for video games, I would have gone to that. I'm not even kidding, man. I'm going to be 44 in October. I got that Nintendo 64 and I played Super Mario nonstop. My parents, that's how they grounded me: they took my system away from me. I was glued to that thing. We had arcade games back then, when we were allowed to go and not have to wipe down everything and everyone could touch the same joystick. God, I would get calf cramps from playing Bad Dudes. I couldn't walk for days. I don't know what the hell would happen to me. I don't know. I would get dehydrated, and then my calves would seize up.

Anyway, cut to me, I'm in freaking college, in acting school, and I love acting – but I never went to classes. Nine times out of ten, I was either with girls or I was playing video games. I was playing Golden Eye in tournaments and Vice City. I was playing Grand Theft Auto for like two months straight. I'm not even kidding. I didn't go to class! I'd wake up in the morning. I'd be like, "Yeah, yeah. I'll be there. I'll be there." My roommates would be like, "Dude, come on!" I had to basically cut myself off.

“I had to basically cut myself off.”

Ryan: Everybody's obsessed with stuff like TikTok and Twitch streaming right now, especially because of lockdown. When you see that stuff, do you feel like that can be fertile ground in the future for more classical styles of storytelling?

Dan: I think that what I've seen where you see all the late-night shows, and all the shows that used to be in front of a live studio audience, and everything has come over to this style, this virtual style. That’s the wave of the future. I think that it's going to be bite-sized like this. But I think it's all going to continue to exist. I think there will be long-form venues — I think that will continue — but a lot of people are very forgiving now. They're very used to this style of virtual interaction.

On top of that, between the augmented reality world and the virtual world, that's the future of entertainment. Putting the person in the movie; fighting alongside your favorite action star. That’s where it's going. If we continue to be in these situations where we're in our houses a lot, they're going to cater the technology to that. Augmented reality, I don't know how much you know about that, but you map your house with these goggles on, and it turns your house into the landscape of the game. And I'm sure in a few more or years, you'll be able to click a button, put some glasses on, and then suddenly you're fighting zombies in your living room. And that's also your exercise, which is exciting, really exciting. Let's see where that goes. There's a lot of fun to be had with that. It's also freaky.

It's also — there's the whole Skynet factor, the whole 2001. When you're in a situation where you have a game that has to map your entire house and all of your movements, you're on a tight rope there anyway.

Ryan: When Facebook owns that company that's doing that and they have all this data on you, it's a little unsettling.

Dan: Yeah. It's a little unsettling. And then that even grows to an even larger question of The Matrix and, "Are we in a simulation?" Is this third dimension some kind of augmented reality, and every day there's scientists just being like, 'We have evidence to prove that's true.'" So it's crazy. It's just boxes within boxes within boxes that we're working on here.

Ryan: I always ask this, but I've found it kind of illuminating: What is your favorite video game of all time?

Dan: Okay. Wow. Hold on. My favorite video game of all time? I think it would have to be... Golden Eye, high-speed tournament-level, on the original system. I think I would be highly competitive playing that. I think that's my favorite. What's your favorite?

Ryan: There’s the difference between the thing that makes me the most nostalgic, which is the first game I ever owned on Game Boy, and then being able to admit that it’s probably not a masterpiece. The first game I ever had was Super Mario Land. It's black and white and it's very different than any other Mario game, because they had to make it work for that tiny little system. But it's so charming, you know?

Dan: Yeah. I'm very excited. My daughter just got a very early version of Tetris. So I'm getting excited. She's going to start to get more into video games.

Ryan: Have you ever played Tetris Effect in VR? I think you'd enjoy it. It's trippy.

Dan: What? Whoa. Wow. Where it's just this massive wall coming down? That would be really cool, actually. I dig that. It's almost educational. I'm watching [my daughter] do it and she's learning spatial awareness and she's learning timing and things, you know? It's like basic geometry.

This interview has been condensed and edited for clarity.