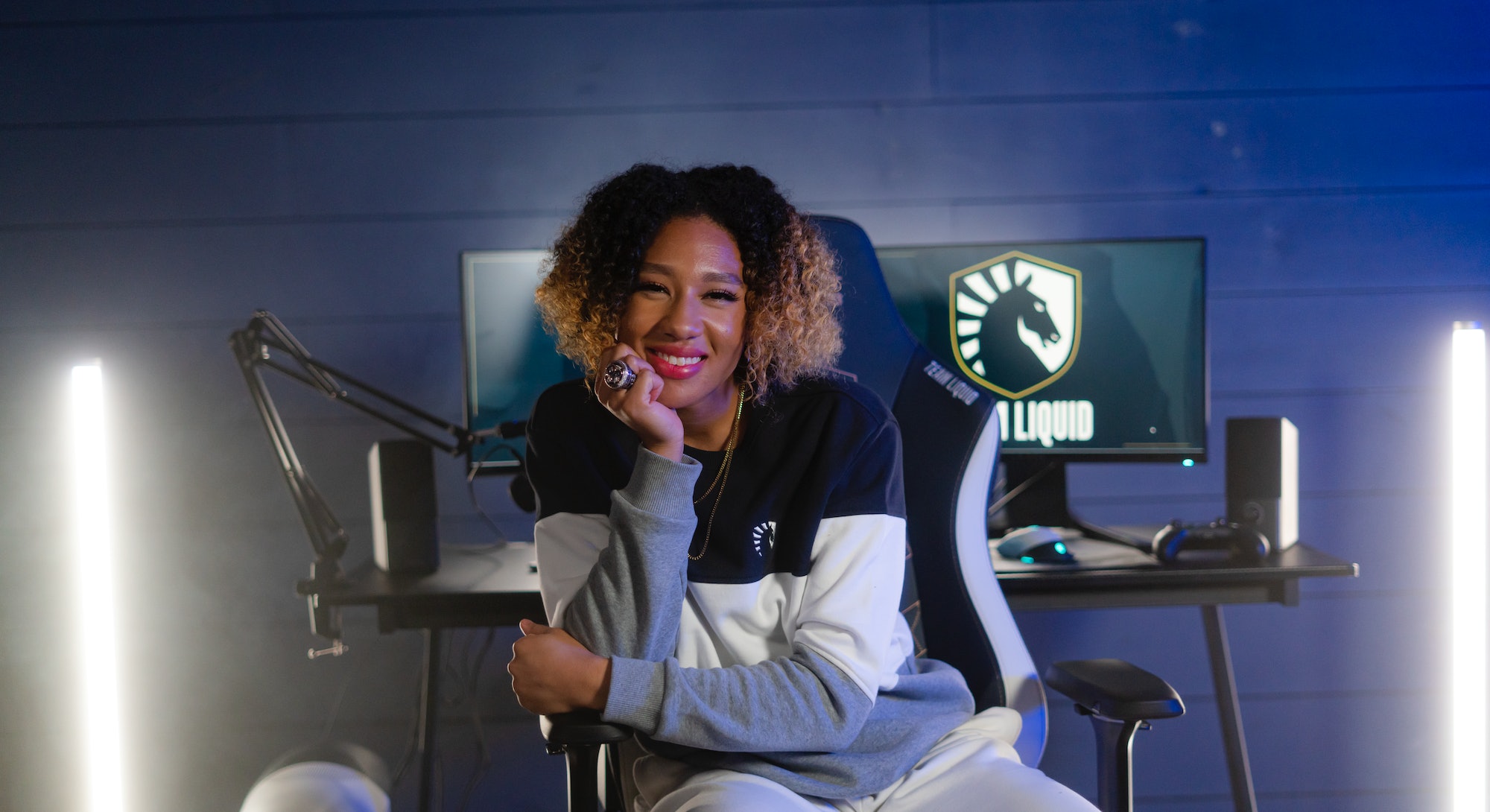 Aerial Powers is still in the prime of her career as a small forward for the Washington Mystics, but she's joining a new team as part of her burgeoning foray into video gaming. The WNBA champion and popular Twitch streamer has announced today that she's joined Team Liquid as both a streamer and ambassador.

While reaching a career high of 16.3 points per game last season in the WNBA's bubble, Powers has built a following of more than 5,000 subscribers on Twitch, where she plays NBA 2K, Apex Legends, Valorant, Call of Duty and NASCAR Racing. She'll work with Team Liquid to promote its events and marketing deals, including Alienware as well as heading up the organization's recently formed Diversity and Inclusion Task Force.

The partnership marks the first of its kind for a WNBA player, and Powers also joined Ford Models' esports and Gaming division in October. In just two years, gaming has gone from a personal hobby for Powers into a venture that could continue to pay off after her basketball career ends. Input talked to Powers to discuss the significance of her joining Team Liquid, what she hopes to achieve in a space that's been hostile to women, and the WNBA's outspoken support for Black Lives Matter.

Ian: What made you take the leap from gaming on your own to streaming for the public?

Aerial: It's kind of crazy, I've been a gamer for forever since the Nintendo 64 days with Mario Kart and Tony Hawk. Gaming has been part of my life since the beginning. Around two years ago, we about to go into the playoffs. My friend was streaming on Twitch, and I'm like, "What's Twitch?" She said, "Do it, it'll be fun."

So I started, and it created a life of its own. After WNBA games, I can't sleep because my adrenaline is so pumped. I always used to play games, so I started streaming them. The people that actually came to my games and didn't get a chance to talk to me or who just want to see me afterward could join, and it became it's own little community and took off from there.

“I always used to play games, so I started streaming them.”

Ian: So there's been a big overlap between the basketball and gaming communities?

Aerial: I think it's a huge overlap. I didn't realize how big it was going to be until I actually started streaming. If you think about it, you have your favorite player and you get to see them off the court in a different light. People see me as extremely competitive, going at it with the opponent, and then they can come to Twitch to have personal conversations and engage.

Ian: A lot of attention has been paid to how difficult it was for players to be isolated inside the WNBA and NBA bubbles. Did gaming help provide a salve during that time?

Aerial: Yes, it's been much needed the whole time — not just because of the bubble but during COVID overall. We had a team meeting at the beginning of last season, and the coaches are like, "How are you guys doing mentally?" My teammate goes, "Well we're all bored, but I think AP is fine." Because I had video games in the bubble.

My teammates were laughing at me because I brought both of my monitors, brought my PC. I had a modem I brought for high upload and download speeds so I could stream. I had no problems, and it allowed me to have some sense of freedom in a place where I wasn't free because in the bubble, you're really locked in. I could keep my mind focused and, again, connect with my fans that couldn't be there for the season.

Ian: Did you bond with any other players in the bubble because of gaming?

Aerial: I bonded with a few girls. Allisha Gray on the Dallas Wings, me and her play. She loves to game. She plays Call of Duty, NBA 2K.

“I get chills when I think about actually joining their team.”

Ian: What does the opportunity to join Team Liquid mean to you?

Aerial: It means a lot for Team Liquid and myself. First of all, there's a championship mentality there. And not only that, what they want to do when it comes to the diversity and inclusion space really resonates with me me, and their values align with mine. The fact that they're a legacy esports team — you could see it on my face, I get chills when I think about actually joining their team.

Ian: It's gotta be crazy going from not knowing what Twitch is to getting so deep into this space.

Aerial: Yeah, it's been a phenomenal journey. Before I got into Twitch, a lot of times an WNBA player has to go [play] overseas [during the offseason.] And I was like I want to get so deep into esports that it becomes my next career. Even if I'm still playing [basketball], maybe I have the opportunity to say I don't want to go overseas. This could pivot into another career path.

It's just amazing what the co-CEOs, Steve Victor [Goossens] and Steve [Arhancet], are doing. The things we have planned for this year, it's going to be phenomenal. I don't want to tell you too much, but it's going to be crazy.

Ian: What do you want to achieve through the Diversity and Inclusion Task Force?

Aerial: For one, one of the biggest things right now is when you look at esports, what do you see? You see that it's male dominated. But women make up a lot of gamers. We make up almost half. You don't see the percentage when it comes to sponsors, when you're looking at Twitch. I see a lot of guy gamers on the Twitch discovery page, but I almost have to search for the girls.

When you talk about esports teams as well, you don't see a lot teams having a lot of space for females. There are a few — Valor, for example, has all-female teams. But it's not enough. And we need to see more women in leadership positions as well. So other females need to know, "Hey, this is a space that I too can be in." For Team Liquid and myself, those are some of our goals to address in 2021.

Ian: Gaming has been hostile to women, and especially women of color. What do you think fans can do to make it a better environment?

Aerial: Not only fans but organizations. That's what Team Liquid is doing just having me on there. It's important when it comes not only to Black women, but all women being able to feel like this is a safe space.

I'm not all about "I'm a man or a woman." It's not about your gender. It's about your skillset. I'm getting judged on my voice, not on my skillset. And when it comes to being a professional athlete, like I am, there's a lot of stigmas. It's "Oh, you're not as strong as him. You're not as fast as him." But esports eliminates that physical element because it's only about what you bring to the table on your mouse, keyboard, or controller. So to answer your question, I think that's where we need to get, and that's what the team and I plan on doing.

Ian: Do you think coming from the WNBA, which has been huge for women's visibility in sports, makes you qualified to address this in esports?

Aerial: I think it does because you hear a lot of "Hey, get back in the kitchen. Girls aren't as good!" on the WNBA side. And, honestly, when I switched over to esports and got so heavily into it, I did not think I would get the same things on this side that I got playing in a game.

If I'm doing well, I haven't spoken yet, and then I go to speak, they're like, "Wait, are you a girl? Wait, wait, what?" Like it shifts from me being good to me being a female. And that totally needs to change.

Ian: The WNBA has been very outspoken about Black Lives Matter, arguably even more so than the NBA or any other leagues. Why do you think that is?

Aerial: Well if you look at the percentage of Black women in the WNBA it's extremely high. [83 percent of the league is made up of women of color, and 67 percent is Black.] We all felt what was happening with police brutality — and even the president. My team wearing the shirts with the bullet hole and blood on the back got press everywhere.

We understand what's going on, we know it's not right, and we have a voice to change that. Younger kids are looking at me because I have a voice, and I'm not telling them to vote this way or do this. But I am expressing to them how I feel, what I think is right. I think we really did a great job this year.

“Younger kids are looking at me because I have a voice.”

Ian: Those T-shirts and the Atlanta Dream coming out in support of the team owner Kelly Loeffler's Senate opponent were some of the most powerful moments for the WNBA. What did you think watching the team take that stand?

Aerial: It means a lot. I don't think people realize how much courage it takes, especially when it comes to ownership of their own team. There are so many questions like the backlash that could come from playing for that organization. And the fact that they stood by their statements throughout the whole time shows how strong of women they are.

Ian: Do you think Loeffler needs to be removed from the league?

Aerial: I'm going to say: Don't you think? Why would we want someone that thinks that way in our organization?

Ian: Yeah, I don't think there's any place for her in the WNBA. Let's bring it back to you to end this, though. What keeps you motivated going forward as a basketball player and gamer with all the success you've had?

Aerial: It's just having the safe space for women. That is really a big motivation for me when it comes to esports. I feel like just as big as my voice is in the WNBA, it can be the same thing for esports. To get with a team like Team Liquid — their legacy is just as impactful. I think we can do some amazing things, including more female tournaments for them to showcase their skills.

This is going to happen until women have an opportunity, until they have a level playing field to do the things they love and the things that they're good at.