It’s not just you, the OLED Switch really is disappointing 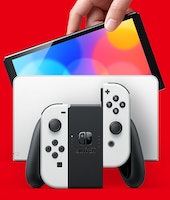 The year the original Switch was released, and it remains largely unchanged.

The new Nintendo Switch (OLED model) does 4K gaming, right? No, actually, and it gets worse...

Apart from having a richer OLED screen, the $350 Nintendo Switch (OLED model) is pretty much the same console Nintendo originally unveiled in 2016 — albeit now with a 720p resolution in handheld mode and 1080p in docked mode — the same old NVIDIA chip, and the same amount of RAM. The bezels are thinner, which is a nice aesthetic improvement, but every other feature feels lukewarm at best.

The console’s internal storage has doubled from 32GB to 64GB; there’s a beefier kickstand with more adjustable angles than the regular Switch’s flimsy stick-of-gum design; and Nintendo also has upgraded the speakers with “enhanced audio.” For those that need a wired internet connection, Nintendo added an ethernet port to the dock, a feature found on the original Xbox, which launched 20 years ago. If this is the long-rumored Switch Pro, I am not impressed.

That’s it? — For starters, the OLED screen is a nice improvement, but it’s hardly revolutionary. The PlayStation Vita had an OLED display a decade ago and many smartphones, like the iPhone 12 and Galaxy S21 Ultra, have OLED screens. There’s nothing special about a standard OLED display in 2021. And, though the upgraded display is great for players who mostly use the Switch in handheld mode, the resolution is still HD. While a 4K display would have been a very expensive inclusion, bumping the resolution up to 1080p full HD would have at least made the OLED display a more compelling upgrade. Nintendo claims the Switch (OLED model) has 4.5 to 9 hours of battery life, but getting the upper rating is going to be a stretch for most games. Credit to Nintendo for calling the new model the “(OLED model)” because it’s basically the only feature worth being excited for.

Just about every other improvement barely moves the needle for me. Take, for example, the ethernet port, which Nintendo already sells as an adapter for $30. It’s useful for downloading games faster, and for playing competitive games where a stable internet connection is preferred. But you can’t take advantage of the ethernet port when in handheld mode. So, if you’re a handheld-first player, there’s really no reason to get hyped for this.

The increased storage is nice to have, sure, but with reasonably-priced microSD cards that go up to 512GB, is it really that useful? I mean, if you’re shelling out big bucks for the new OLED model, surely you have enough to spend on a high-capacity memory card that renders the onboard storage less of a selling point. Other features, such as the improved audio and updated kickstand, are incremental upgrades that are barely merit discussion in my opinion. Unless you’re one of those suspiciously-enthusiastic people in Nintendo ads who are hunched over a Switch, I can’t think of one time where I’ve even used the console’s kickstand (and if you do, Hori’s $13 playstand is so much better). Finally, this model also has Bluetooth 4.1, but it’s unclear whether it supports wireless headphones or earbuds functionality. This one, small, quality-of-life update that users have been begging to have for years, Nintendo doesn’t even explicitly confirm or deny.

It’s scalping season — When I saw the initial news this morning, I jumped out of my seat with joy — but the bombshell announcement we all hoped for turned out to be nothing more than a company’s plan to milk the same old Switch (again) this holiday season. But, while the Switch (OLED model) — already sick of this name — is not the Switch Pro that we all want, there are plenty of die-hard Nintendo fans who will buy one anyway. If the current market trends of video game consoles are anything to go by, all signs are pointing to an October 8 launch date that will see the majority of stock land in the hands of scalpers. It’s fitting that the new Switch is launching alongside Metroid Dread, which is exactly how people will feel when they find out what they’ll have to endure to procure one.

The combination of scalpers and a worldwide chip shortage has already caused major PlayStation 5 and Xbox Series X/S shortages, with people forced to jump through multiple hoops just to secure them. TechRadar editor-in-chief Matt Swider, who posts about restocks and has helped thousands of people buy a console, is already expecting October 8 to be chaotic. With Nintendo consoles known to be in short supply even in the best of times, it’s highly likely there won’t be enough for everyone on launch day.

Quadruple dipping — This could be Nintendo pushing out the OLED model as a replacement for the current model, only to launch a “4K Switch Pro” next year or the year after that, essentially quadruple-dipping on its popular console. The OLED model marks the third Switch since the platform’s 2017 launch (four, if you count the updated model with the bigger battery). For all we know, Nintendo wanted to release a proper “Switch Pro” with 4K and an updated NVIDIA chip, but the global chip shortage prevented it from happening and the company had to cut features to help boost fall earnings reports.

Nintendo is the master of milking each console generation for its last drop. It’s nothing new. Most recently, it did it with the 3DS, which had six different models over its life cycle. Nintendo’s done it with each previous handheld, too. The original Game Boy saw several different updates in its lifespan between 1989 and 2003, until it was finally superseded by the Game Boy Advance line.

After years of rumors that brought the hype for a “Switch Pro” to a fever pitch, the Switch (OLED model) arrives not with a bang, but a whimper; it’s a letdown on almost every front.