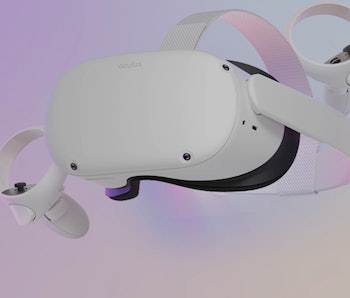 There are two truths to life during the pandemic: wear a damn mask when you're outside and VR is a great way to maintain your sanity when you can't leave your home.

I've been using my Oculus Quest several times a week since the pandemic hit the U.S. earlier this year and Beat Saber continues to give me life, letting me literally break a sweat in my living room. Unfortunately, if you want to get in on the Oculus Quest fun, they're still largely out of stock almost everywhere.

Good news: the Oculus Quest 2 might be on the horizon. Leaker "WalkingCat" shared the below image of what may be the second-gen version of the standalone VR headset.

In response to questions that asked whether this is a "pro" or "lite" version of the Quest, the leaker said "nope" in response. "I believe its dubbed 'Quest 2'" and "names are subject to change."

The leaked image shows a white version of the alleged Oculus Quest 2 (the current version is black) with a few small tweaks. The straps look more refined (and rounded) and the USB-C port has moved from the side of the plastic front plate to alongside the headphone jack.

Update: The same leaker has shared a new pic just a day after the first posting, not-so cryptically suggesting that the announce or launch date for the new headset could be September 15.

New stuff we want to see — The Quest has improved quite a bit since it launched. The addition of Oculus Link lets you connect a USB-C cable from the headset to a PC to play Oculus Rift games and the addition of hand-tracking and multi-window support in the web browser has made it more versatile as a productivity device.

I'd love to see Oculus improve the screen resolution so there's less of a screen door effect, widen the field of view for the cameras so controller and hand-tracking are more accurate (especially in blind spots like directly below the headset), and maybe include better spatial sound. Longer battery life and more storage would be good additions, too.

Lighter design confirmed? — Earlier this year, Bloomberg reported that Facebook was working on Quest headset that's 10 to 15 percent smaller and lighter. Last week, I tweeted for the upteenth time about how awesome the Quest is and that I'd like to see a lighter version.

Andrew Boswarth, Facebook's head of AR and VR, seemingly confirmed a lighter Quest. His response to my tweet was a simple "Noted =)." How mysterious!

Holiday rumble — It's been just a little over a year since the Quest launched in 2019. It's due for an update. Though there's no word on when the Quest 2 might release, a launch this holiday season (with ample supply) could be the moment VR's been waiting for. It'd also give the launch of the PlayStation 5 and Xbox Series X some added competition.