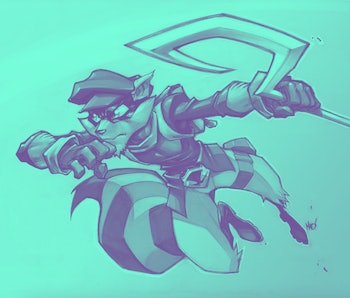 It’s obvious that designing and releasing a successful video game takes a lot of work, but when most people think about the labor involved, they only imagine what goes into a title after it’s been greenlit by a major company. Far before any game gets to that stage, however, designers invest hundreds of hours into crafting the perfect pitch for why a corporation like Sony or Nintendo should greenlight and help fund a project in the first place. Most of the time, audiences don’t see that phase of production, but recently uncovered documents provide a fascinating glimpse into just that area of work.

As Kotaku reports, fans of the Sly Cooper series game recently came across a trove of documents related to pitching what eventually would become Sly Cooper: Thieves in Time. Although released in 2014 for the PlayStation 3 and Vita systems, work on pitching the entry actually began years earlier around 2008-2009, and included video presentations, proof-of-concept demonstrations, and a whole bunch of concept art. In this case, the documents focus solely on convincing Sony that Thieves in Time would work best on its then-upcoming handheld, touchscreen system. Clearly, the pitch paid off, seeing as how the title went on to see the light of day... unlike some, lesser fortunate ideas from years’ past.

Focusing on the perfect fit — The documents particularly reveal developers’ attempts at selling just how and why their title would be a perfect fit for a major company’s consoles. In the case of Sly Cooper: Thieves in Time, designers focused on the game’s potential to utilize all of the Vita’s main selling points like its touchscreen and motion controls, even before the Vita was actually announced publicly.

Concept art aplenty — Of course, no video game presentation would be complete without concept art... and lots of it. It’s a lot of fun to see all the iterations and ideas developers tossed out to Sony to sell them on the game, and makes one think of all the lost concept art floating out there on the internet. The leaked files also include a bunch of video playthrough demonstrations on a prototype Vita, which is definitely worth checking out, as well. More behind-the-scenes looks like this, please and thank you, internet.