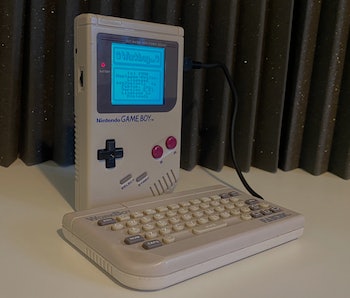 A mostly unknown accessory for the original Game Boy has been unearthed from the depths of the Nintendo Graveyard, thanks to some sleuthing by Liam Robertson, a video game historian. Robertson found one of only two known prototypes of the WorkBoy — an accessory with 12 apps like an address book and a calendar — and managed to get the device up and running.

The WorkBoy is a cute little keyboard that plugs into the Game Boy via the dedicated Link Cable. It essentially turns your handheld video game console into a full Palm Pilot, complete with a language translator, a database editor, and 10 more applications.

While the WorkBoy has never been a secret, per se — it debuted at CES 1992 — Robertson really put in the extra work here, tracking down one of the device’s creators to learn more about its history. That work paid off, as he’s now the proud owner of the only working WorkBoy on the planet.

A little work goes a long way — The WorkBoy is made more intriguing by the lengths to which Robertson went in order to hold a working version in his hands. Robertson’s search for the WorkBoy brought him first to Eddie Gill, lead architect on the device, who said he only knew of two prototypes left in the world: one deep in the Nintendo vault (he assumes) and the other in the hands of Frank Ballouz, founder of Fabtek, the WorkBoy’s producer.

Ballouz did have one — but he didn’t have a Game Boy on which to test it out. He sent his prototype to Robertson for testing. Robertson had little luck at first, soon realizing the WorkBoy required a cartridge to operate. Lo and behold: the huge Nintendo leak from earlier this year included a ROM copy of that very bit of software.

After flashing the ROM to a rewritable cartridge, Robertson finally found success. It turns out the WorkBoy’s keyboard works incredibly well for a device nearly three decades old.

Imagine a world like that — The WorkBoy never made its way to store shelves for a variety of reasons: an explosion at a factory in Japan sent the price of D-RAM skyrocketing, among other production issues. It also would’ve been priced around $89 — the same price as buying the Game Boy itself at the time.

Still, Robertson’s journey has us feeling nostalgic for what could have been. Tapping out math homework on the tiny calculator; having our friends put their home phone numbers in the address book; booting the software up just to check the clock… the options are myriad.

More like this
Steven Wright
5.4.2022 3:41 PM
Run it back
Xbox mobile app adds Snapchat-style Stories to the mix
Will Gendron
5.12.2022 12:15 AM
Indie love
Nintendo’s latest Indie World showcase paraded the small but mighty
Jackson Chen
5.5.2022 10:50 PM
Tech
Ayaneo's Air handheld is an OLED Steam Deck without all the chonk