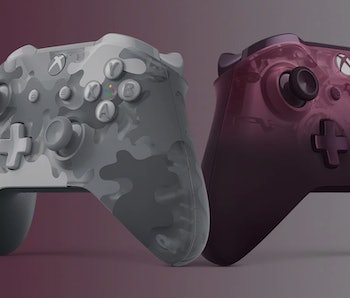 Microsoft is dishing out two bold new colors for a pair of limited-edition Xbox One controllers dropping in May. Most striking is the "Phantom Magenta" version, which is partially transparent and exposes the interior. Xbox One's camouflage series is expanding with a new "Arctic Camo" controller that's also partially exposed. Both retain a monochrome treatment for the buttons and thumbsticks.

More than a pretty face — Both controllers will offer custom button mapping and Bluetooth enabling play on Windows 10 PCs, laptops, and mobile devices. A textured grip on the bottom of the controllers provide a greater sense of control.

Pre-order now — The Phantom Magenta edition is available for pre-order now before its March 16 release. In May, the Arctic Camo will follow exclusively at Walmart and the Microsoft Store. Both will retail for $70. And fear not an expense that'll be sunken by the end of the year: Microsoft has confirmed they'll be compatible with the Xbox Series X.