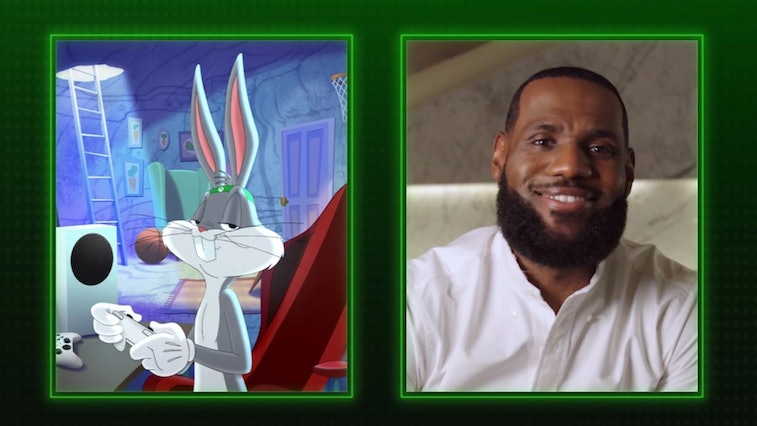 IT's Looks like LeBron James has been keeping busy in the NBA bubble. Prior to the 2021 release of Space Jam: A New Legacy, Microsoft and Warner Bros. are tipping off an epic partnership with Xbox in celebration of the new movie. Together, stars Bugs Bunny and LeBron James are teaming up to help fund coding education and create an original arcade-style video game inspired by the revamped Space Jam movie.

LeBron announced on his Instagram that he and Bugs Bunny are on the hunt for the best fan-submitted video game ideas — “the loonier, the better!” Two winners will have their ideas brought to life when the game launches in June 2021 as a perk for Xbox Game Pass Ultimate members. Anyone over the age of 14 can compete.

Coaching code — To help coders jump-start their creativity, Microsoft Stores are hosting free Space Jam: A New Legacy-themed virtual workshops on video game creation. Students will build a playable prototype of a video game using block-based coding on the MakeCode Arcade platform, while learning about the professional skills and STEAM careers involved in game design, Microsoft said in a statement.

Two additional Microsoft Learn lessons are available to older fans and more experienced coders. Using data from both human and Tune Squad basketball players, coders will focus on how to use player stats to make real-time decisions in the middle of a basketball game. They’ll also have the opportunity to create their own web app.

Score a digital dunk — After coding your dream team, you can submit your winning game idea on the contest website. Starting December 14 through December 30, just review the official rules, select the gaming genre of your choosing using a key image, and describe your game idea in less than 500 words.

Winners will get their names featured in the game credits, an exclusive winner's bundle with signed and authenticated LeBron James memorabilia, Space Jam: A New Legacy merchandise and Nike VIP packs, a personalized Xbox Series S console, a private friends and family screening of the film, and a virtual Microsoft coding workshop for their local community. If that isn’t enough to get you into coding, I don’t know what is.

Part of the bigger plan — The video game contest, coding workshops, and lessons align with Microsoft's greater skilling initiative, which aims at helping 25 million people — including those from underrepresented populations — acquire new digital skills and apply them to their passions. So whether you’re a Lebron James fan or a Michael Jordan fan, apply your love of basketball and Looney Tunes to score the ultimate slam dunk. OG Space Jam fans, though, should take note of this promotional video featuring LeBron James, as it's actually the first time we've seen him act alongside Bugs Bunny. Thoughts?