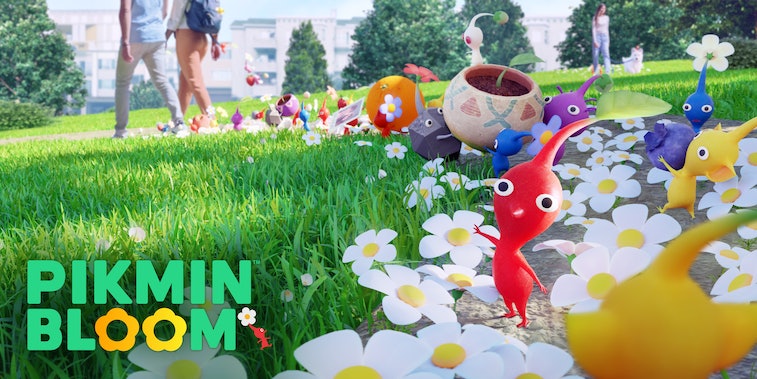 Niantic may be best-known for its runaway hit Pokémon Go, but the company’s gaming empire extends far beyond throwing Pokéballs. The developer’s latest, Pikmin Bloom, uses the same augmented reality gameplay principles as Pokémon Go, though with far fewer battles and way more flowers. And it’s finally rolling out to the public.

Pikmin Bloom is available for download on iOS and Android smartphones right now in Australia and Singapore. A tweet from the new @PikminBloom account says the game will be “coming to your area soon.”

The new AR game is the first product of Niantic’s big partnership with Nintendo, which was announced in March. At the time, Niantic would only divulge that the app would include activities to “encourage walking and make walking more delightful.”

And that really is the general gist of the game. Pluck seedlings from the ground as you find them as your walk, watch them turn into Pikmin, and then saunter around the neighborhood with your ever-growing crew of colorful critters. And then…well, no, that’s really the whole game.

A little pep in your step — Pikmin Bloom’s ultimate goal is to get you up off the couch and onto the sidewalk. John Hanke, Niantic’s founder and CEO, makes this abundantly clear in the game’s new announcement video.

“I’m a huge believer in the power of walking,” Hanke says. “That’s why at Niantic we want to inspire people to go out, explore their neighborhoods, and have fun at the same time.”

As you walk around your neighborhood — as a Mii character, of all things — the Pikmin you’ve collected will follow close at your heels. Pikmin are powerful creatures: They can make flowers bloom along the sides of your path. The more Pikmin you collect, the more flowers you’ll end up planting in your virtual neighborhood.

This is meant to be a collaborative experience, too. If others in your neighborhood are also using the app, you’ll be able to see their flowers, too.

Just getting started — Pikmin Bloom is a cute little game, and it will surely find plenty of fans to plant virtual gardens around the world. It may not have the same replay value as Pokémon Go — there aren’t nearly as many collectibles or rarities — but its simplicity of gameplay and style is perfect for the Pikmin franchise.

Pikmin Bloom is really just a taste of what’s to come from Niantic. The company has developed an entire suite of AR tools called the Niantic Lightship, and it runs a funded Creator Program to help developers bring their AR projects to life. Niantic is also reportedly working on a set of AR glasses, though details of that particular pet project are still very scarce.