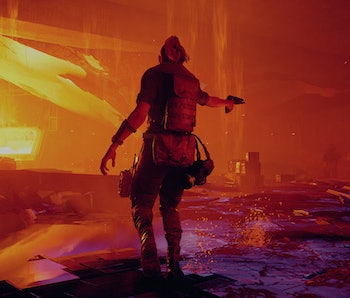 We’re sitting in the middle of a cloud-gaming renaissance, thanks to services like Microsoft’s xCloud, Google’s Stadia, and Amazon’s Luna. It’s a ride that Nintendo has for the most part declined to participate in, save for select games available for streaming in exclusively in Japan.

Nintendo has suddenly, and without warning, changed its thinking on cloud-streamed gaming. During today’s Nintendo Direct Mini, the company announced award-winning game Control would be available starting today via cloud streaming. Another hit, Hitman 3, will also be coming to the Switch via cloud gaming in the coming months.

Cloud gaming is often praised for its ability to allow users to play their games whether or not they’re sitting in front of their home consoles. This isn’t exactly an issue for the Switch, which is mobile by default.

But cloud gaming will be monumental for another pivotal reason: it removes some of the limitations inherent in the Switch’s hardware.

Graphics without the hardware — The biggest upside of cloud-based gaming is that the majority of in-game processing is actually completed by a remote server, rather than everything being completed on the console itself. For the Switch — which prioritizes many other things over computing power — that leeway should allow the console to play games it wouldn’t otherwise be able to power.

There will, of course, be limitations to the Switch’s cloud-streaming capabilities; it’s still a Switch, after all. Control will be a great test of those limitations. It’s an intense game, to say the least, and a graphics-hungry one at that. If Control can stream smoothly on the Switch, it’s probably a good sign for cloud gaming on the console moving forward.

Nintendo is requiring players to first download and run a test launcher for at least five minutes to verify your connection is up to snuff. You may also need to wait a bit — GamesRadar reports that the game’s servers are backed up and refusing new downloads at the moment.

Room for expansion — Control and Hitman 3 are exciting titles to bring to the Switch, given that neither has ever been made available on Nintendo consoles. More exciting still are the implications of Nintendo’s new allowance for cloud gaming on its record-breaking console.

Cloud gaming could open entirely new avenues for game developers that work with the Switch. The Switch’s biggest setback has always been its lack of processing power compared to other consoles.

But if the likes of Control can stream to the Switch without a hitch, developers will likely be interested in testing that capability for themselves. Who knows: it could even make room for Xbox to bring its Game Pass to Nintendo's device.