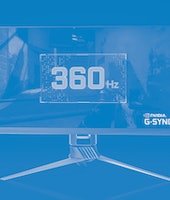 Although most people will never need it, NVIDIA is betting a lot of gamers are going to want this. The company is introducing G-SYNC monitors, in partnership with ASUS, that can go all the way up to a 360Hz refresh rate. NVIDIA says these new panels can deliver results esports athletes will drool over. According to studies the company has done, the faster refresh provides player reaction times up to 4 percent faster than on standard 60Hz displays.

On a tear — Normally esports athletes accept screen tearing as part of the game, a sacrifice made in order to avoid waiting for frames to refresh. Even if your system or game won't hit 360fps, NVIDIA says its displays will avoid stutter, deliver low latency, and avoid screen tearing on lower frame rates with G-SYNC’s 360Hz and Variable Refresh Rate technologies.

Gains — Though it's hard to communicate what this 360Hz beast looks like over another screen, on its site NVIDIA notes that "This isn’t a GPU performance chart — this is a raw player skill benefit. In the world of competitive sports, a 4% difference is a game changer. To put this into context, in the 2016 Summer Olympics, 1% determined the difference between silver and gold in both men’s and women’s 100m and 200m dashes." If the monitor's "less than 3ms" response time gets down to 1ms by its release date, all the better.

PlayerUnknown — NVIDIA says it will release these monitors later this year but hasn't put a number on just how much these displays will cost consumers. Expect this to be a premium luxury for only the most competitive of gamers unless you, like, really want to own some kids in Fortnite.