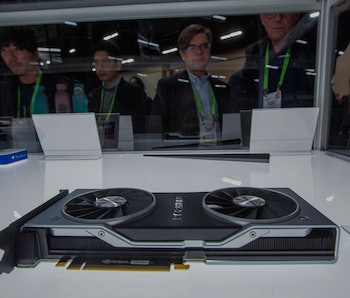 Even though pandemic splurging and the release of next-gen titles like Cyberpunk 2077 have made it nearly impossible for gamers to buy new GPUs, it looks like Nvidia is about to release a new one. In a teaser video for its GeForce RTX event happening on January 12, a brief frame appears that shows a picture of a laptop, further fueling existing rumors that the company will be updating its mobile chipsets following the new desktop GPUs it released last year.

Mini-teaser — The latest Nvidia RTX chipset available for laptops is the 2080 Super, released in 2019, whereas desktops got the new 3080 back in September 2020.

Another frame in the teaser video suggests that Nvidia may use the event to enable Resizable BAR in its 3080 chip. Resizable BAR is a technology that boosts gaming performance by increasing throughput between a computer's CPU and GPU. Nvidia's desktop GPUs already support the technology but it isn't yet enabled.

A confluence of suck — Chipmakers including Nvidia and AMD have been facing extreme shortages of graphics cards lately. People are stuck at home, and that means they're spending less on experiences and more on at-home entertainment.

There was also the November release of Microsoft and Sony's latest consoles, both of which use AMD GPUs. Microsoft's head of Xbox, Phil Spencer, has pleaded with AMD to speed up manufacturing of GPUs so more consoles can get out the door. It's unclear if high demand alone has caused the shortages or whether the pandemic is also a factor.

At the same time, the price of GPUs is also rising by as much as 25 percent as tariffs imposed by the Trump administration go into effect that target products made in China. A new manufacturing facility for chipsets is being developed in the U.S., though it won't be finished until 2024.