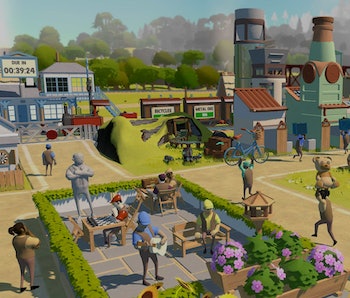 In the most unsurprising career move since a guy named Bowser took over Nintendo of America, legendary game promoter Peter Molyneux has decided that he loves NFTs now. In fact, he loves them so much that his next game, Legacy, is going to be all about them.

Yes, the mind behind such ambitious titles as Black & White and Fable — which were criticized by some for falling short of Molyneux's lofty predictions — has joined the likes of Serj Tankian and Ubisoft in jumping onto the blockchain train, despite the fact that it left the station quite a while ago.

Living the legacy — According to a blog post, Molyneux's studio 22cans describes Legacy as the "first-ever blockchain business sim," which is quite a dubious distinction indeed. (You have to wonder if anybody but Molyneux would want such a title.) Based on the write-up, it seems that the game will be some sort of management sim where players will compete with each other to become business geniuses and ascend to entrepreneurial godhood.

There's just one twist: in order to play the game, you have to buy a "Land NFT." This will give you the amazing opportunity to create your own "blockchain business association," which apparently entitles you to something called "Legacy Keys," which you can annoy your friends and colleagues with. Other people can accept your "Legacy Keys" and become your "in-game business partner," which allows them to play the game themselves, but they'll owe you a share of their earnings. That's capitalism, baby!

All about the coins — Of course, this amazing game pitch wouldn't be complete without its own cryptocurrency, LegacyCoin, which uses the Ethereum blockchain. (Yes, the same Ethereum blockchain that has been criticized for its ludicrously inefficient power usage, though Ether promoters have promised that a fix to that is in the works.) This LegacyCoin will be used to trade for Legacy Keys, in-game NFTs, and other amazing things that you would expect a game like this to have.

So far, it's unclear if you will be able to buy or trade LegacyCoin for real currencies like most crypto coins, but 22cans seems to be emphasizing that the currency will be earned through in-game events. But then again, this is the blockchain we're talking about, so adjust your expectations accordingly.

Par for the course — As a whole, nobody should be surprised that Peter Molyneux has decided to dip his toes into the world of crypto — it was an utter inevitability. However, given that Steam has banned any "blockchain" games that produce NFTs or cryptocurrency, it seems that the future of crypto in gaming is a bit sketchy at the moment.