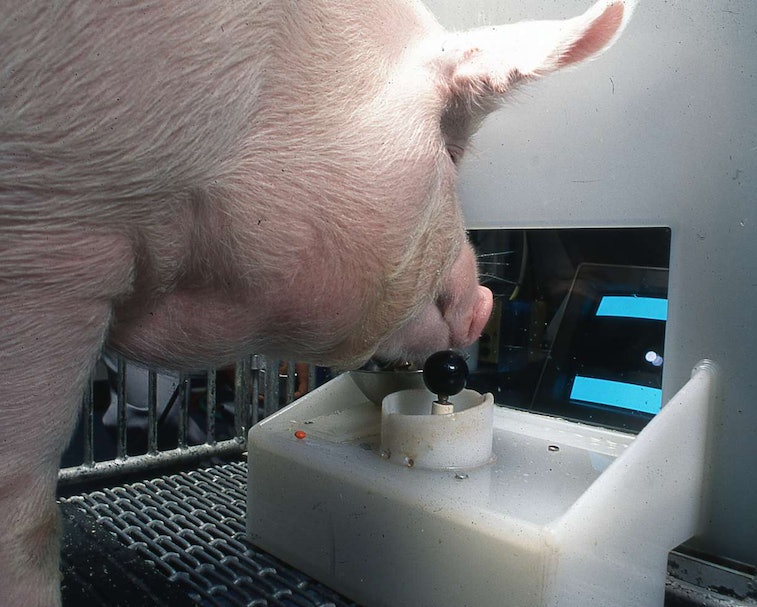 Pigs still haven’t figured out how to fly in real life — but they’re definitely capable of doing so in a video game. Pigs have plenty of intelligence to not only play video games but to do so well, according to research conducted by Purdue University’s Center for Animal Welfare Science. That research is being published this week in the journal Frontiers in Psychology, after more than two decades of start-and-stop research into animal intelligence.

“What they were able to do is perform well above chance at hitting these targets,” Candance Croney, lead researcher on the paper, told Gizmodo. “And well enough above chance that it’s very clear they had some conceptual understanding of what they were being asked to do.”

While we’d like to imagine our human brains have evolved far beyond those of pigs, Croney’s research confirms we’re more alike than most people would assume. We even benefit from the same methods of unwinding after a long day of work.

Brains and agency — Croney’s research follows two Yorkshire pigs, Hamlet and Omelet, and two Panepinto micro-pigs named Ebony and Ivory. Purdue's labs have been working with the pigs since the late '90s, and even back then Croney had a sense that they weren't just able to learn to play video games: they enjoyed playing video games.

The pigs first learned a handful of commands similar to those you’d teach a dog before moving onto more complicated learning. Next, they learned to move a cursor across the screen using their snouts and mouths. It was only later, after much trial and error, that researchers were able to teach the pigs to play games like Pong.

Lori Marino, a neuroscientist unaffiliated with the current paper, called the pigs’ abilities “a testament to their cognitive flexibility and ingenuity.” She also said the pigs had displayed self-agency by recognizing their own actions could make a difference.

But no fingers — The biggest hurdles to allowing pigs to successfully play video games were all physical. The pigs turned out to be farsighted, for example, so researchers had to find an optimal distance for the screens; the Yorkshire pigs couldn’t stay on their feet for too long; and, of course, joysticks aren’t exactly made to be used with snouts, but pigs don’t have fingers.

These researchers have confirmed something pretty astounding: pigs are plenty intelligent and, just like us, they love playing games — especially when there’s a reward involved (dog food, in the pigs’ case). Maybe someday they’ll be able to have even more fun with some assistance from brain-computer link technology like that from Neuralink.