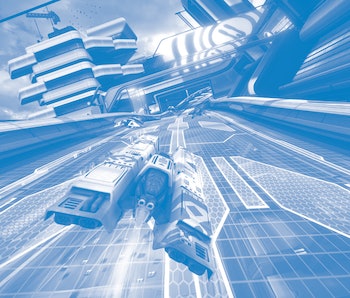 If you were around in the mid-'90s, you might vaguely remember a trend of flashy neon-lit racing games which was introduced in part by the classic PlayStation 1 game Wipeout (as well as F-Zero). Now, it seems that the influential game archival group Forest of Illusion has obtained the source code to the game and its Windows port, and they've released it online.

The group released the source code on Twitter, with the caveat that they aren't sure if the game will be "buildable" from this code. If this is all Greek to you, source code is the human-readable code of a program that is fed into a compiler in order to translate that into code the computer can actually run. The source code is a bit like the script of a play, and the compiler is the part that lets the actors learn their lines, stage directions, etc...

Based on the replies to the tweet, it seems that some hackers have indeed managed to take the code and turn it into a playable game, albeit with errors. This is potentially exciting news, because it could open the door for dedicated modders and hackers to build a source port that grants the game modern features, like support for modern resolutions, texture filtering, and perhaps even online play. (Keep in mind that no such project has been announced: we're just noting that this has happened for other games that have had their source codes released.)

As with many leaks of this type, this source code isn't being released under any license, so it's definitely in a legal gray area, so to speak. That said, if you're looking to scratch the Wipeout itch without busting out a dusty game console, BallisticNG is a futuristic racer on Steam that very much styles itself after the series. It even includes handling options that are explicitly based on certain entries from the series. It's also $8, so it's not like you're breaking the bank.

If you’re less interested in flying around in a dropship, you can check out Wipeout’s legendary soundtrack instead, which features songs by notable electronic acts like the Chemical Brothers. Yes, they were really trying to get club kids to buy a PlayStation back in the day, and it worked like a charm.