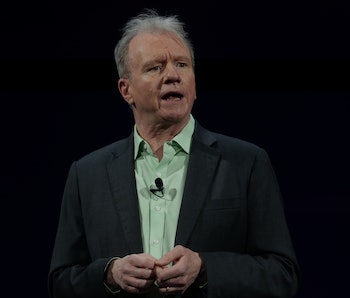 An internal email sent by PlayStation president Jim Ryan addressed the looming threat of Roe v. Wade being overturned in the U.S. by calling for employees to “respect differences of opinion” on abortion before refocusing on the executive’s cats, Bloomberg reports.

Both sides — Eliminating Roe would make a person’s right to an abortion an issue handled state-by-state, and open up the possibility for a nationwide abortion ban, two truly destructive blows to Americans’ reproductive rights and bodily autonomy.

Ryan reportedly took the corporate middle path by not taking a side on the pressing issue. PlayStation’s customers and staff are “multi-faceted and diverse, holding many different points of view” Ryan wrote. “Respect does not equal agreement. But it is fundamental to who we are as a company and as a valued global brand.”

Cat care — Following up a hollow statement like that with the positive distraction and stress-relief raising a cat can provide just seems rude. Ryan reportedly shared that “it was recently his two cats’ first birthday” before discussing “cats’ birthday cakes, their noises and his desire to one day get a dog.” It’s just a bad look.

And while “respect does not equal agreement” is a nice platitude, it’s not functionally true. By respecting someone’s opinion (however dangerous, destructive, or wrong) you’re giving its “due regard.” You’re saying it has value enough to be heard, to exist in parallel with the widely agreed upon truth. And in this case, the truth is that banning abortion will almost certainly be damaging to the well-being of PlayStation’s employees and community.

“Standing up for reproductive choice and liberty is not a difficult decision to make,” Bungie wrote. The company did not get into specifics, but shared that it’s “committed to safeguarding the freedom and privacy of its employees and providing support to all employees affected by this decision.”

Companies like Amazon and Gucci have taken similar steps, offering to reimburse (some) employees who have to travel to seek a safe abortion. Hopefully, PlayStation comes around too. Cats are great, but they’re not enough.

More like this
James Pero
8.4.2022 7:30 PM
Finally Some Good News
Pokémon's Fidough is the soggy little bread beagle we deserve
Maya Ernest
21 hours ago
Style
The lightest, coolest running hats to get you through summer
Oliver Haslam
8.12.2022 10:00 PM
Guides
How to make your iPhone keyboard vibrate as you type using iOS 16