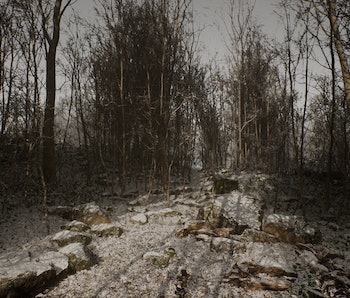 Rumors of Hideo Kojima’s supposed involvement in the forthcoming PlayStation 5 exclusive Abandoned have been making the rounds since the title was first announced in April. The theories — which are filled with detailed evidence thanks to a group of dedicated Redditors — essentially claim that Abandoned is a new Silent Hill game by a different name.

The list of things we actually know about Abandoned is very short, though. Blue Box Game Studios director Hasan Kahraman describes it as a “cinematic, first-person horror survivor shooter set in a highly detailed open world environment” that “favors a realistic approach to survival.” Other than a few screenshots of creepy snow-covered forests, though, we’ve seen nothing of the actual game.

Blue Box was all set to reveal a full gameplay trailer yesterday (August 10), finally putting an end to the long-winded conspiracy theories about this being a secret Silent Hill game. And then the trailer just… never dropped. Which, you know, plays right into the game’s ongoing mystique.

Blame it on the app — In the vast majority of cases, there are very few reasons why a trailer wouldn’t drop at the planned time. Blue Box has chosen to think outside the box with the Abandoned rollout, though, and created a full PS5 app just for watching the game’s trailers.

The app, which is called “Realtime Experience,” is meant to provide next-gen quality trailers, gameplay demonstrations, and live events right on the PS5. The Realtime Experience app seems to be giving Blue Box more trouble than it’s worth, though. The company has already said it plans to upload all the trailers and extras to YouTube as well.

Just give us the trailer — It’s genuinely baffling that Blue Box hasn’t released a trailer yet. The company originally planned to release a trailer via the app in June, at which point the team said the Realtime Experience “wasn’t quite there yet.” So this is now the second time in two months that Blue Box has failed to meet the promises it’s made to players.

If the Realtime Experience app is creating so many issues for Blue Box, the solution seems pretty apparent from here: just release the trailer on YouTube. Would-be players are sounding off in the company’s Twitter mentions about how they feel disrespected at this point — not exactly a great way to build hype from a mostly unknown studio. Others still are wondering whether or not the game exists at all.