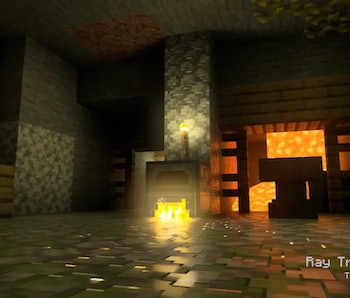 Two years ago, ahead of the release of Xbox’s next-gen consoles, Microsoft outlined a feature of the Xbox Series X that would support ray tracing, using Minecraft as a technical demo. Now, as reported by The Verge, a new preview build for one of the world’s biggest games includes limited support for this functionality. The preview itself is limited to Xbox Insiders, a program that allows passionate users to test system updates, new features, and even games still in development.

On Monday, a Minecraft preview build was made available to this exclusive community, and aside from offering a ray tracing toggle option within the game’s settings, was also marked as being optimized for the Xbox Series X|S.

While it is exciting that improved graphic fidelity seems to be right around the corner for Minecraft, accessing ray tracing is not as simple as one might hope. Enabling this feature is a set of resource packs, and downloading them for Xbox is not feasible at the moment. Instead, one must join a PC Minecraft session, where these resource packs have been enabled. From there, ray tracing can be turned on through the aforementioned toggle option.

A sign of things to come?— The fact that this preview build was labeled as optimized for Xbox’s next-gen consoles has the community theorizing that a broader patch that gives users the ability to enable ray tracing will be coming sometime soon.

For the uninitiated, ray tracing is a series of computer techniques that allows for more realistic lighting within the game in question. This can include everything from more dynamic shadowing to light reflections to refraction, and everything in between. Ultimately, ray tracing provides a way for video games to incorporate the specific ways light behaves into the playing experience.

At the end of 2020, ray tracing was launched for Windows PC through NVIDIA’s RTX graphic cards, but so far the feature has not been accessible for console-owners. Given the fact that NVIDIA’s high-powered GPUs have been difficult to acquire, ray tracing has not exactly seen a wide adoption within the Minecraft community at-large.