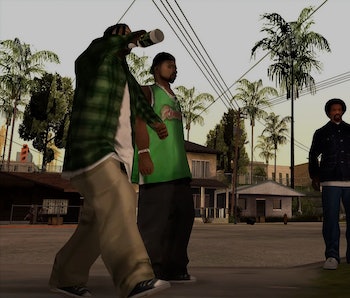 Fifteen years ago, hackers uncovered a laughably primitive sex minigame that was cut from Grand Theft Auto: San Andreas, which set the gaming world ablaze. Now, in 2021, hackers have reportedly found that the code for the infamous "Hot Coffee" feature is still included in the so-called "definitive edition" of Grand Theft Auto: The Trilogy.

As reported by VGC, Rockstar confirmed that GTA: The Trilogy was taken offline on PC because of "unintentionally included files" in that version of the game. According to data miners, these files include all the music tracks that were removed from Vice City and San Andreas due to licensing issues, as well as an uncompiled version of the game's scripting files, which may even include cut or missing content like "Hot Coffee." (Maybe we can finally get Darkel's missions in GTA 3 after they were cut due to 9/11. Get to work, modding community!)

Same shit, different day — Though the "Hot Coffee" controversy might seem tame today — the models were fully-clothed, mind you — it was big news at the time, as the ESRB would rate any game with a depiction of sex as "Adults Only." Since many retailers like Wal-Mart wouldn't carry AO-rated titles, it was essentially a commercial kiss of death for any major game, and the resulting lawsuits from the controversy ended up costing Rockstar's parent company Take-Two millions of dollars in legal fees.

Given these costly events, you would think that Grove Street Games would be clever enough not to include such files in these re-releases, but I guess not. Then again, every aspect of these remasters is so poorly-done on every level that it beggars belief, from the bizarre character models to just overall playability. As of a few hours ago, the PC version of GTA: The Trilogy is back online after it was taken down, but we don't recommend playing it in its current form, unless you enjoy creating amusing physics-based memes for Reddit.

Rocking the boat — In the meantime, many consumers have already requested refunds for the game. Rockstar fans are so disappointed in the quality of the re-release that the official GTA subreddit has taken itself offline in protest. In a message, the subreddit's moderators express frustration with Rockstar for pulling the original games from sale in advance of the remaster's release, as well as other issues.

As someone who grew up with Grand Theft Auto 3, I was very much looking forward to revisiting these games, but it seems like Rockstar has botched this project in every way imaginable. We can only hope that modders can fix these new versions on the PC platform to give fans the enhanced versions that these classic games so deserve.